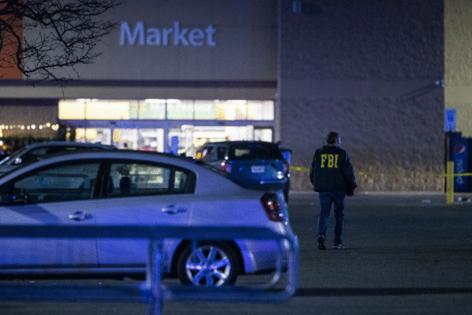 VIRGINIA BEACH, Va. — Seven people died in a shooting inside a Chesapeake Walmart late Tuesday night, police confirmed Wednesday morning. The shooter is among the dead, according to police.

Chesapeake police Chief Mark Solesky on Wednesday confirmed that the shooter was a Walmart employee. The shooter, whose identity has not been released because next of kin has not been notified, died by a self-inflicted gunshot wound, Solesky said.

The shooter, a man of unknown age, opened fire starting in the Walmart break room with a pistol, according to Solesky. He added that there is no further threat to the public.

The first report of a shooting came in at 10:12 p.m. Tuesday at Sam’s Circle Walmart located off Battlefield Boulevard. Police were on scene by 10:14 pm, Solesky said. The building was declared safe by 11:20 pm.

Five patients from the shooting were being treated late Tuesday night at Sentara Norfolk General Hospital, confirmed Mike Kafka, a spokesman for Sentara Healthcare. Kafka was unable to provide the conditions of those being treated.

Grief was on display outside both the hospital and at a family reunification center set up in Chesapeake.

Just after 2 a.m., the brother of a victim was escorted out of the emergency room after he erupted into a fit of emotion, wailing and yelling after learning his loved one had died. “They killed my brother,” the man yelled as he ran on foot away from the hospital.

Shrieks cut through the air as a group of people exited the Chesapeake Conference Center, illuminated by the flashing blue lights of a Chesapeake police car. The conference center had been set up as a family reunification site.

LOS ANGELES — When Rachel David arrived at her Benedict Canyon home early Saturday morning after a night out, she thought the rows of flashing police cars were part of a film shoot, which is fairly common in the area.

Hours after a San Francisco court released body-camera video of a man attacking Paul Pelosi with a hammer, QAnon extremist David DePape, the suspect in the attack, made a surprise call from jail to a Bay Area news station ...Read More