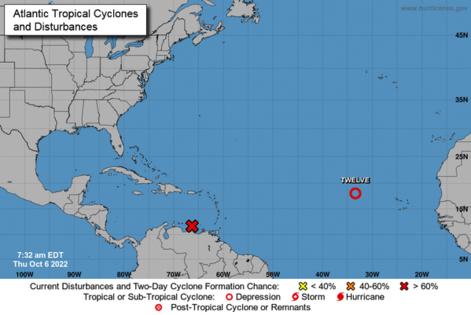 The National Hurricane Center began issuing advisories for Potential Tropical Cyclone Thirteen at 11 a.m. EDT Thursday. If it does turn into a tropical storm, it would be named Julia and would be the 10th named storm of the 2022 Atlantic hurricane season.

A tropical storm warning is in effect for the Colombia coast from the Colombia/Venezuela border west to Riohacha. Based on the current forecast track, the system is not a threat to Florida.

“Seas to 11 ft are currently occurring with this system over the southern Caribbean,” the hurricane center’s National Tropical Analysis and Forecast Branch said on Twitter.

The hurricane center is also monitoring Tropical Depression 12, which is several hundred miles west-northwest of the Cabo Verde Islands in the eastern Atlantic. Forecasters say the system, which is far from land, is expected to turn into a remnant low soon, likely within the next day.