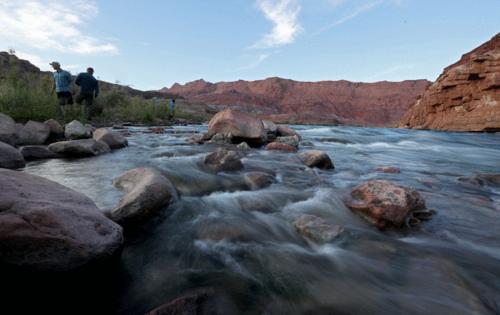 LOS ANGELES — With the Colorado River in crisis and reservoir levels continuing to decline, California water agencies that depend on the river are planning to significantly reduce their use of water from the river starting next year.

As a result, officials with the Metropolitan Water District of Southern California said they plan to endorse mandatory conservation measures next year to begin rationing water for cities and local agencies that supply 19 million people across six counties.

California is entitled to use 4.4 million acre-feet of Colorado River water per year, more than any other state. The water flows through canals to farmlands in Imperial and Riverside counties, and to cities from Los Angeles to San Diego.

Four water districts and the state’s Colorado River Board said in a letter to the federal government on Wednesday that they are proposing to reduce water use by up to 400,000 acre-feet per year starting in 2023. That would amount to about 9% of the state’s total water allotment from the river for the next four years, through 2026.

Details of how the water districts will achieve those reductions have yet to be worked out. But the agencies’ leaders said they are preparing to adopt conservation measures that will affect cities as well as farming areas.

“California is stepping up and leading the way on addressing this situation with action and making significant reductions,” said J.B. Hamby, a board member of the Imperial Irrigation District.

Hamby said the reductions “are going to involve serious sacrifice within California, but it’s necessary in order to prevent the system from crashing.”

California water agencies have been under pressure to shoulder substantial water cutbacks. Federal officials in June called for the seven states that rely on the Colorado River to come up with plans to drastically reduce annual water diversions by 2 million to 4 million acre-feet. But negotiations among the states grew tense and acrimonious, and didn’t produce a deal.

Lake Mead and Lake Powell, the river’s two largest reservoirs, now sit nearly three-fourths empty. Without major cuts in water use, the latest projections show growing risks of the reservoirs approaching “dead pool” levels, where water would no longer pass downstream through the dams that impound them.

California’s pledge remains far from the goal set by federal officials, however, and the state’s water agencies will likely continue to receive pressure to accept larger cuts. But managers of California water agencies said they hope their voluntary proposal will help catalyze water-saving contributions by others across the Colorado River Basin to prevent the reservoirs from bottoming out.