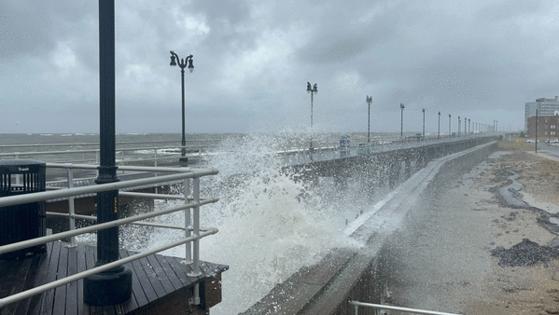 Local officials already dealing with the high water issues and loss of beach braced for more at least through Tuesday and possibly into Wednesday from the slow-moving storm, which came on the heels of Hurricane Ian’s remnants.

The National Weather Service issued a coastal flood warning through 9 p.m. Eastern time Tuesday, along with a high surf advisory, with “1 to 2 feet of inundation” expected in low-lying areas near the Shore, back bays and tidal waterways.

Atlantic City, Ocean City, and Cape May all saw moderate flooding by Monday afternoon, with worse to come with Tuesday’s high tides, when some areas could experience near-major flooding.

Impacts are expected to be felt longest in the back bays.

But the rain also brought a positive: a dent in the drought or dryness that’s affected much of South Jersey and the Philadelphia region.

“We’re in the thick of it right now,” Cameron Wunderlin, a meteorologist for the National Weather Service, said Monday morning. “And it’s going to continue through Wednesday. Most of the coast is what we’re concerned about.”

Wunderlin did not expect major flooding in the immediate Philadelphia area, although flooding of low-lying areas or those with poor drainage is possible. The ground has been dry enough to absorb the rain so far.

The storm began causing headaches along the Shore over the weekend and into Monday.