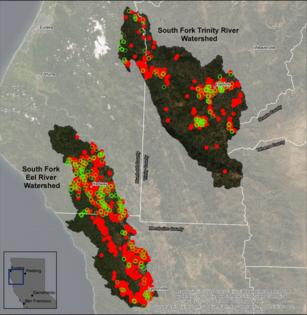 That required knowing how much cannabis there was statewide, and where.

So the Los Angeles Times embarked on its own effort to map illegally grown cannabis, one that depended on a view from space.

Cannabis operations are easy to spot in satellite imagery. Plastic-covered hoop houses and plots of individual dark-green plants are distinctive and hard to miss, even more so in clear-cut tracts of forest or vast expanses of desert.

The Times obtained 2021 satellite imagery from a mix of public and private sources to canvass nearly 3,000 square miles of land in parts of six counties: Siskiyou, Trinity, Mendocino, Shasta, Butte and San Bernardino.

The analysis counted outdoor cultivation spots and measured the square footage of greenhouses. It avoided areas with other active agriculture that could be mistaken for cannabis, and looked for telltale signs of weed, such as outdoor swimming pools to hold water and outdoor plots adjacent to hoop houses.

To estimate greenhouse crops, The Times used industry-supplied yield formulas. Not all greenhouses were filled and some crops were lost to wildfire or police raids, so The Times followed another industry practice and reduced raw crop estimates by 30%.

ATLANTA — It was summer 2020 and John Hollis, a publicist at George Mason University, was asking a scientist about his research on COVID-19 antibodies, when the scientist turned the tables. The scientist, Lance Liotta, ...Read More

MIAMI — A new Broward School Board member is being denounced by civil-rights groups, LGBTQ leaders and two of her fellow board members after saying she welcomes support from all kinds of groups, even the far-right Proud ...Read More