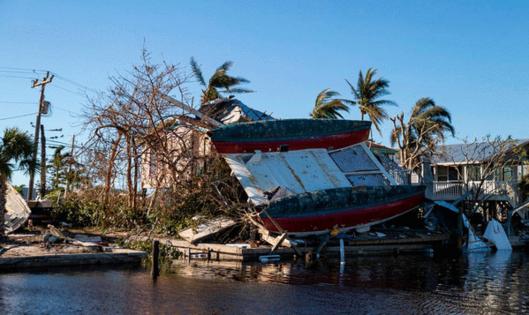 While most Floridians woke up to a normal Sunday with plans for church, family gatherings and watching football, many people in the Southwest Florida coast, the areas most ravaged by Hurricane Ian, spent the day growing weary, frustrated and angry as they waited for electricity, gas, water, food and other basic needs.

Some took to social media to vent and plead for help.

“We do not have any help in St. James City, there are so many people here that have completely lost everything like elsewhere,” Denise Martinez posted on a Facebook group called The Pine Island Prospect. “As of this morning, nobody has brought in supplies besides the people trying to get to the island themselves to check on loved ones or if they still have a home. All of the people on the island need food, water, gas, propane, they do not even have a roll of toilet paper. Something needs to be done today or more people will die. It is a complete war zone down here.”

Gaby Gutman Hall’s post on that same Facebook group said: “The devastation is horrific, however as I learned with Hurricane Andrew the first few weeks after the storm is when people need the most help. We are not sure why government agencies are not providing supplies even if it’s temporary until residents can wrap their head around what happened and what they need to do next.”

A woman on the Fort Myers Beach Island Life Facebook page wrote: “I’m looking for my 96-year-old grandmother, Julia Rodriguez. She was living in Sunshine Mobile Village. Last we heard she was evacuating on Wednesday but haven’t heard from her. She doesn’t have a cell phone. Any advice? We are very worried and live in NY.”

Miami native Tony Jankowski, who moved to Port Charlotte in 2015, works at the Gasparilla Marina in the town of Placida, where they lost 60 of 800 boats in the hurricane and suffered considerable damage. He said the mobile home park next to the marina was completely leveled, some of the trailers landed in the marina, and most of the residents there were retirees on fixed incomes.

Jankowski said he is concerned that people in that area are “in panic mode,” especially recent transplants who had never experienced a hurricane.

“Back with Andrew, we had been through hurricanes before, so we knew what we had to do to prepare, and we knew to be patient after,” he said. “Over here on the West Coast, the best way to explain it is there are a lot of Northerners, snowbirds. A lot of people who moved here recently since COVID, who used to live in Michigan, Chicago, Minnesota, they have moved here full time, made this their home, and this is their first hurricane so they’re panicking.

“Remember Andrew, we couldn’t get anything or get to stores for two or three weeks. I drove up to Fort Lauderdale to go get stuff and then drove back to Miami. Here, you have so many people that this is so new to them that they’re in a panic mode.”

Jankowski, whose house is still without electricity, said he had just returned from Publix, where he got a quarter-pound of four different deli meats. The man in front of him ordered 3 pounds of each meat. He said cars lined up for more than two miles along Veterans Way to get into a Home Depot.