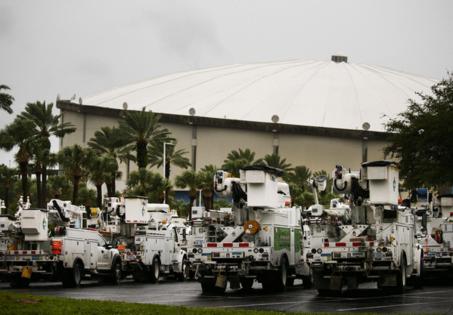 Tampa Electric Co. reported more than 24,000 were without power as of 9:50 a.m. Sunday across the company’s coverage area, which covers 2,000 square miles, including Hillsborough County and parts of Polk, Pasco and Pinellas counties.

Tampa Electric plans to have power restored to most customers by Sunday night, according to a statement released Saturday, though some areas of eastern Hillsborough and Polk County may not have power until Monday night.

The company expects to have 90% of its outages in Pinellas and Pasco counties restored by Sunday night, according to a statement released Saturday. On Friday, the company had hoped for power to be back in both counties by Saturday night.

The numbers of those waking up without power have steadily declined since Thursday morning. The more than half-a-million locations in Tampa Bay were part of 2.7 million statewide without power following the Category 4 hurricane.

Both companies said they have thousands of workers — power line technicians, tree trimmers and others — working around the clock to restore power. Many crews were brought in from other states before the storm, Duke said.

As of Saturday late afternoon, Duke said it had restored power to more than 861,000 customers. The company serves 1.9 million customers across the state. Localized flooding in some areas has hampered the company’s ability to restore power.