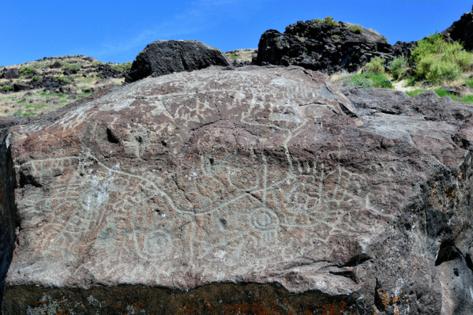 One carving near the Celebration Park Visitor’s Center looks like a circle with two rectangles on top of it.

Schwend, director of Canyon County Parks, Cultural and Natural Resources, says she thinks it looks like an owl. Other people say a rabbit. Some younger visitors say it looks like Mr. Krabs from SpongeBob SquarePants.

In all truthfulness, nobody truly knows what the rock carving means. But it’s just one of the thousands that line the Snake River Canyon in southern Idaho; hundreds of engravings exist in Celebration Park, just 40 miles south of Boise, alone.

They’re called petroglyphs, and they’ve existed in Idaho for as many as 12,000 years.

“These petroglyphs here would have been linked to the Shoshone-Bannock and the Northern Paiute people that inhabited southern Idaho,” Schwend told the Idaho Statesman in an interview in August.

“We’re looking at this as being an area that is inhabited on and off throughout history for back to 10,000 years,” Schwend continued. “The x-ray fluorescence studies they just did showed that some of these petroglyphs right here at the beginning of this trail are 10,000 years old, plus or minus 2,000.”

You may have heard of hieroglyphs before — the language system used in ancient Egypt of detailed paintings or carvings of animals and other depictions of people and daily life.

Petroglyphs differ from hieroglyphs in that a distinct language can be discerned from the latter, with each object representing a word, syllable or sound. That’s not the case with petroglyphs; there is no predictable method or pattern to translate them, meaning much of what we see today remains a mystery.