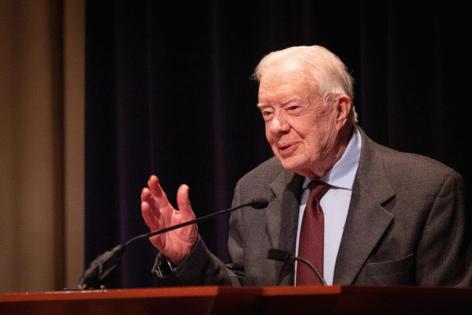 Many around the country used social media to post greetings to the 39th president, including former President Barack Obama.

“Happy 98th birthday, President Carter!” Obama posted on Twitter. “Your dedication to public service and the work you and the @CarterCenter have done to lift up others is an example we should all follow.”

“Wishing a very Happy 98th Birthday to Georgia’s own, President Carter!” Warnock posted on Twitter. “Thanks for always looking out for Georgia and our country!”

The Jimmy Carter Presidential Library posted one of the oldest pictures of Carter, dating back to 1925 the year following his birth. The U.S. Naval Institute posted pictures of Carter as a young man serving his country. Carter is the only U.S. president to have graduated from the Naval Academy.

“Heartfelt birthday wishes to President Jimmy Carter, who today turns 98. The collaboration between Emory and The @CarterCenter, established in 1982, has fostered an extraordinary community of scholarship and practice.”

The Carter Center was also collecting online greetings for the former president on the organization’s website.

“May your year be filled with joy and good health,” one person posted. “You are our hero for humanity. Thank you for being a wonderful example. Sending my love.”

Carter has said he plans to watch the Braves play the New York Mets late Saturday. The hometown team also joined in the birthday celebration, tweeting a photo of Carter in his Braves cap.