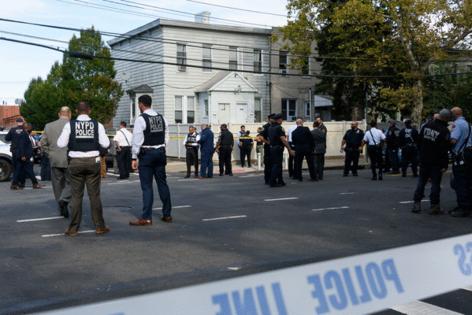 A chilling spate of recent incidents involving innocent victims runs the gamut from a woman savagely beaten inside a Queens subway station to a 17-year-old Brooklyn girl killed by a stray bullet to a Mexican immigrant nearly killed by a sucker-punch outside a Manhattan restaurant.

The latest terrifying attack took the life of of a veteran city EMS lieutenant on her way to grab lunch in Astoria this past Thursday, with a schizophrenic stranger knocking her to the sidewalk before stabbing her 20 times for no apparent reason.

“There’s something profoundly wrong with New York,” said Mary Hassler, 66, an Astoria resident and cosmetics sales person. “The number of these attacks are growing. There seems to be more and more all the time.

Only the shooting this past Wednesday of teen victim Shayma Roman, out of the cited incidents, did not involve suspects with mental health issues, police said. The NYPD does not keep count of random or unprovoked attacks committed by the mentally ill — or anyone else.

And in a year when the NYPD reported a nearly 12% drop in homicides, there was also a citywide 37% jump in robberies and a 43% increase in grand larceny as New Yorkers expressed their fears about the ongoing situation.

“You hear of these attacks daily,” said Lucia Constantine, 46, as she passed the spot where 61-year-old FDNY EMS Lt. Alison Russo was inexplicably killed on a September afternoon. “They have been more and more, and there’s no consequences. These people are out here with rap sheets as long as their arms.”

Just last week, shocking video emerged of a homeless man targeting a total stranger in the Howard Beach-JFK Airport subway stop back on Sept. 20. The suspect, with a criminal past that includes the killing of his grandmother as a 14-year-old, repeatedly punched and kicked the mother of two small kids, who was in danger of losing her sight in one eye after the relentless beating.