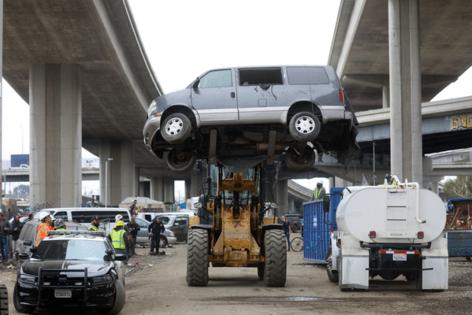 Bay Area authorities are in the final stages of closing the region’s two largest homeless encampments, displacing hundreds of unhoused people as they clear massive clusters of tents, shacks and broken-down vehicles that have drawn complaints for years.

The closure of the camps – one by the San Jose airport and one off Wood Street in West Oakland – is part of a regionwide push to crack down on encampments that were allowed to grow while people sheltered in place during the COVID-19 pandemic. Local officials, state agencies and even Gov. Gavin Newsom say shutting the sprawling, often unsanitary camps is necessary to protect public health and safety. But the process in both cities has been fraught, peppered with everything from lawsuits and protests to a train collision.

And both Oakland and San Jose have struggled to find enough housing and shelter placements for everyone uprooted from the camps, leading to fears residents will be pushed to new encampments. The two cities’ efforts highlight the challenges communities throughout the Bay Area are grappling with.

“We’re trying to move into the side streets nearby because we want to stick together, because we’re a community of folks and we look out for each other,” said 24-year-old Jaz Colibri, who is homeless and has been helping her neighbors vacate the West Oakland camp. “But at the same time, it’s hard to do that when they’re intentionally scattering us and displacing us without anywhere for us to actually go.”

In San Jose, city officials were racing against a Sept. 30 deadline to clear an encampment on 40 acres near the airport or risk losing millions in funding from the Federal Aviation Administration. The city has cleared the FAA area, moving 174 people into shelters and transitional housing. Another roughly 100 people, whom the city hasn’t been able to house, have been pushed off the FAA lot and onto a nearby section of Columbus Park. But the park – where people are crammed together in RVs and trailers on a dusty baseball diamond with no shade, or in tents along the park’s perimeter – is not a long-term solution.

“Significant fire and safety hazards created by this new encampment are extraordinarily difficult to mitigate,” city parks and housing employees wrote in a recent memo to the mayor and City Council. The city plans to clear the park by Nov. 18, placing those who qualify in housing or shelter, and asking the rest to move along.

“We don’t have a place to go,” said 70-year-old Roberto Agundez, who is living in the baseball field in a broken-down RV. “It’s not fair. We need more time.”

In Oakland, Caltrans is continuing its cleanup of a camp of 200 to 300 people off Wood Street, on vacant land owned by the agency under the Interstate 80 and 880 overpasses. More than 240 fires have started at the site since March 2020, with some of the blazes disrupting traffic on the freeways above. A federal judge briefly barred Caltrans from dismantling the camp, following a lawsuit filed by residents. But the judge recently reversed course after Caltrans, the city of Oakland and Alameda County collaborated on a plan to move the residents into shelters.

Over the past week, dozens of Caltrans workers were on-site dismantling make-shift shacks and tents and towing vehicles, while volunteers helped frantic residents pack up their belongings. Caltrans plans to clear the entire camp by the beginning of November.

“Caltrans is responsible for maintaining the state’s transportation network for all Californians,” agency spokeswoman Janis Mara said in an emailed statement. The city, Alameda County and other service providers have offered help to all 40 people displaced in “phase two” of the closure – which started in late September – but only 12 accepted alternative housing, she said.

“Future chips may be 10 times faster, all thanks to graphene”; “Graphene may be used in COVID-19 detection”; and “Graphene allows batteries to charge 5x faster” – those are just a handful of recent ...Read More

On Feb. 19, 1906, the mail steamer China pulled into the harbor in Honolulu, Hawaii. It had made the voyage from San Pedro, California, many times before, but this trip made front-page news. Local newspapers heralded ...Read More

Alabama Gov. Kay Ivey has announced a pause in her state’s use of capital punishment. It follows a run of botched lethal injection executions in the state, including two where the procedure had to be abandoned before ...Read More

Before them sits a charming covered bridge that would fit right ...Read More