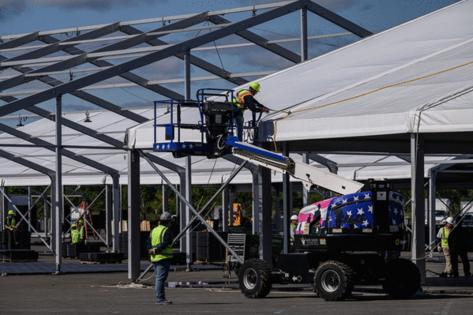 Immediately after appearing together in public for the first time Friday, Rep. Alexandria Ocasio-Cortez, D-N.Y., took aim at Mayor Adams’ plan to erect a migrant tent camp in her district, charging that there’s a “better solution” to be had.

The progressive congresswoman, who’s had a simmering beef with the more moderate-minded mayor for months, offered the rebuke in a brief interview with the Daily News on the steps of City Hall following a press conference with Adams on an unrelated topic.

“I think we can get to a place with a better solution here,” Ocasio-Cortez said when asked about the tent facilities being built in the Bronx’s Orchard Beach parking lot to house upward of 1,000 Latin American migrants.

Ocasio-Cortez said she also ”very much“ sides with ”the sentiment” of Bronx Borough President Vanessa Gibson, who raised a number of concerns about the Orchard Beach site earlier this week, including poor transit access and susceptibility to flooding.

Ocasio-Cortez, who hasn’t previously commented on the tent facility in her 14th Congressional District, said she’s in talks with other lawmakers about “figuring out if there are additional federal resources” that could be allocated to help the city house migrants.

“So that people can get into a better situation,” she said.

Adams spokesman Fabien Levy defended the tent plans when asked for a response to Ocasio-Cortez’s remarks.

“No location is perfect, but we are confident in this decision,” he said. “And we’re glad that so many local elected officials recognize we’re in an emergency and are willing to work with us towards a successful rollout.”

The Adams administration is using the tent camp to alleviate pressure on the city’s shelter system, which has become overburdened by an influx of more than 10,000 migrants, who ended up in New York after crossing into the U.S. from Mexico in hopes of seeking asylum.