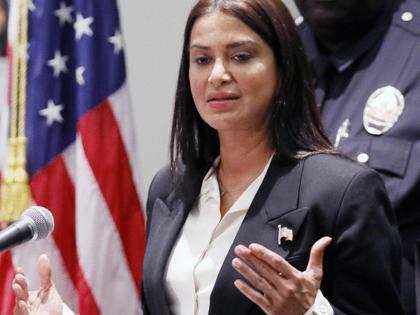 LOS ANGELES — A jury awarded a female Los Angeles police captain $4 million in damages Friday in her sexual harassment lawsuit against the city over a nude photograph that was doctored to look like her and shared around the department.

In reaching the verdict after a day of deliberations, the Los Angeles County Superior Court jurors found that the sharing of the photo of a bare-breasted woman whose face was digitally altered to resemble Capt. Lillian Carranza. a 33-year department veteran, created a hostile work environment. They agreed with her lawyers that the top brass did nothing to stop its circulation or explain the image was a fake despite her plea to the police chief to do so in 2018.

Jurors also found that the LAPD did not take immediate and appropriate corrective action to address the hostile environment as required by state law, after Carranza reported the photo in November 2018 as she endured "severe or pervasive" harassment.

The award "sends a message to people that you can stand up for your rights," Carranza said. "It is all very well having policies and procedures when it comes to sexual harassment, but they need to be followed and in the LAPD that starts with the chief of police."

During the nearly two-week trial, Carranza testified the image was so traumatizing that she was hospitalized on Christmas Eve 2018 with severe high blood pressure as she struggled with suicidal ideation. She said doctors eventually had to double her blood pressure medication.

"Every day, she is going to be haunted. She doesn't know who has seen the photo ... it will always be out there," said Marla Brown, one of her attorneys.

Greg Smith, her lead attorney, added: "I am not shocked by the verdict. The evidence we put forward to the jury was overwhelming."

He said Carranza was so stressed by the proceedings that she could not attend the final verdict.

Lawyers for the city had argued that Carranza had never seen the image in the workplace and was not the subject of comments, jokes or other anything resembling sexual harassment in the office, saying she only saw the image when her attorney gave it to her.