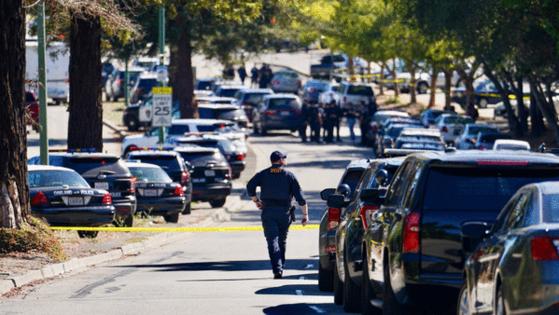 SAN JOSE, Calif. — Two days after an Oakland school shooting left six people injured, police continue to search for the gunmen who stormed the campus before fleeing in a getaway car.

As the manhunt pushed past 48 hours on Friday, police offered no new details about the three suspects – two shooters and a driver – who entered the front door of the King Estates education campus in Oakland’s Eastmont Hills and unleashed a barrage of at least 30 bullets. Law enforcement has attributed the shooting to a “group and gang conflict.”

“The individuals who are responsible for this are still out in our community armed and dangerous,” Oakland Police Chief LeRonne Armstrong said during a Thursday news conference. He said surveillance video from the scene captured the shooters.

Police are now offering an award of up to $30,000 for information leading to an arrest in the case.

The education complex where the shooting occurred remained closed on Friday with more than 600 Oakland students unable to attend classes.

Among the victims were two students – both of them at least 18 years old – a school counselor, a security guard, and two carpenters working at the education complex. As of Friday morning, one of the victims remains in critical condition and another is in stable condition at Highland Hospital. All other victims have been discharged from the hospital.

As the manhunt continues, questions have arisen about potential warning signs and security precautions at the cluster of schools on the King Estates campus, including Rudsdale High School, Rudsdale Newcomer High and BayTech Charter School. About six weeks ago police responded to a stabbing during a “gun-related incident” at Rudsdale High School, police said.

John Sasaki, a school district spokesperson, would not comment on whether the front door to the complex was locked. He said district policy requires doors to be locked during the day and added that police are investigating the matter.

On Thursday, Armstrong said the assailants entered through the school’s front door without the use of any special tools or breaching equipment.

Wednesday’s mass shooting comes amid a wave of gun violence that has rocked Oakland since the start of the pandemic. Oakland’s Highland Hospital, a major regional trauma center, has seen 402 gunshot wound patients in 2022 an 81% increase in gunshot wounds over the same period in 2019, according to data released by the hospital.