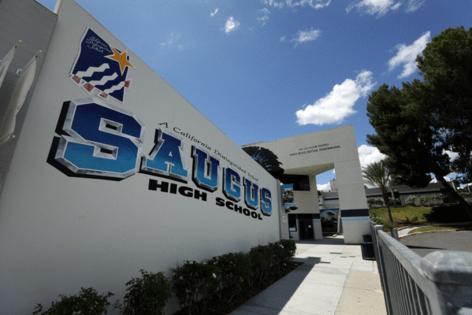 LOS ANGELES — The Saugus High School football team will no longer use the "thin blue line" flag in its pregame ceremonies after a decision by the team's coach, the William S. Hart Union High School District superintendent said.

The flag, a black and white United States flag with a horizontal blue line, has become a contentious symbol. Some use it to declare support for law enforcement, while white nationalists and other extremist groups have adopted the flag for their own movements.

In a letter sent to the Santa Clarita, California, school community, Supt. Mike Kuhlman said the use of the flag had become controversial.

"Just three short days ago, I became aware of a concern about this symbol being flown at Saugus High School football games," Kuhlman wrote in the letter dated Wednesday. "Despite emails for immediate action, and threats of consequences if certain steps weren't taken within a specific timeline, we determined to take our time to understand the issue accurately and to respond thoughtfully."

The school's principal, Geni Peterson Henry, reportedly met with football coach Jason Bornn, who said he "was not even fully aware of the banners in question" although he noted that the team had never held a vote regarding any flag.

"...(It) occurred to (Bornn) that it's possible that some players on the team might not be entirely enthusiastic about a symbol that is being used to represent the entire team," Kuhlman wrote.

Bornn decided to discontinue the use of the flag "in deference to his commitment to inclusivity, kindness and respect..."

"Please note that this decision does not translate into a change in support for law enforcement," Kuhlman wrote. "The degree of enthusiasm behind our District's backing of law enforcement is not measured by the acceptance or rejection of any one particular symbol."

The district is looking for alternative methods to show support for law enforcement, Kuhlman wrote.

The move did not sit well with some.