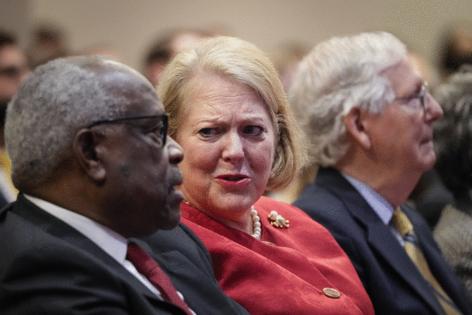 WASHINGTON — Virginia “Ginni” Thomas, a conservative activist and the wife of Supreme Court Justice Clarence Thomas, is set to be interviewed this week by the House committee investigating the Jan. 6, 2021, insurrection at the US Capitol, according to the panel’s chairman.

“Our expectations are, at this point, is that we’ll talk, and we have no indication to the contrary,” Representative Bennie Thompson, a Mississippi Democrat, said Wednesday night.

Asked if her voluntary appearance would occur on Friday, Thompson responded, “It’s sometime this week. And again, to my knowledge, it’s set.”

Thomas’ attorney, Mark Paoletta, didn’t respond to requests for comment on Wednesday night. But he had said last week that Thomas was “eager to answer the committee’s questions to clear up any misconceptions about her work relating to the 2020 election.”

It wasn’t clear if the interview would be in person or take place remotely.

Thompson had sent a letter in June on behalf of the committee requesting that Thomas voluntarily sit for questioning about her alleged involvement in efforts to overturn the 2020 presidential election.

That request had come after emails surfaced from John Eastman, a lawyer advising then-President Donald Trump, showed she was in contact with Eastman, and that her advocacy for the campaign to prevent Joe Biden from taking office was more extensive than previously known.

Paoletta, in a letter after the request was made, argued that the Eastman messages provided no basis to interview her. He also explained that Thomas’s text messaging with Trump’s last White House chief of staff, Mark Meadows, involved her simply expressing concerns about the 2020 results and didn’t warrant questioning.

Thompson also said it wasn’t likely that the committee would reschedule a public hearing that had been set for Wednesday for next week. He and other committee members said no new date has yet been set. The hearing was abruptly postponed on Tuesday.

Representative Pete Aguilar of California said the session was scrapped because all nine panel members were to have played roles, and colleagues felt uncomfortable proceeding without Representative Stephanie Murphy of Florida, whose district was in the path of Hurricane Ian.