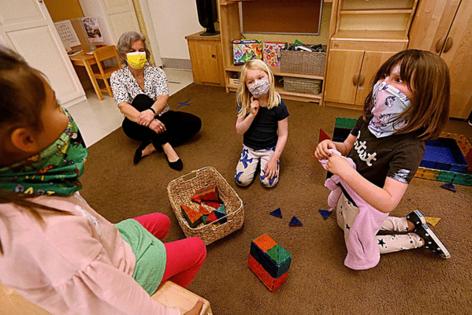 LOS ANGELES — No grade level suffered a steeper enrollment drop during the COVID-19 pandemic than kindergarten, driven by what many parents saw as the futility of placing a 5-year-old in front of a computer all day.

When campuses reopened, enrollment somewhat rebounded, but an overall downward trend deeply worried educators, knowing the harm that missing kindergarten can mean for a child's development.

These measures had widespread support from educators. Some considered them crucial to uplifting the academic, social and emotional well-being of families and students emerging from the pandemic. And the students most in need, they said, include Black and Latino children and those from low-income families.

"The majority of children who are not enrolled in kindergarten are from low-income Latino families," said Pedro Noguera, dean of the University of Southern California's Rossier School of Education. "The research is very clear that kids who enroll in kindergarten are better prepared academically and socially for school in first grade, and more likely to be reading with proficiency by third grade."

Newsom cited budgetary concerns while sidestepping the merits of the bills, calling attention to measures for expanded early education, extended-day academic enrichment and increased K-12 funding that he has taken.

Some advocates credited Newsom for supporting measures on which they place a higher priority. These include a massive expansion of transitional kindergarten that, in essence, offers a free — optional — public education in California to 4-year-olds for the first time.

Groups representing the state's school boards and school administrators expressed some relief that an additional mandate would not be added.

"The Legislature and the governor have been very ambitious and they've done a number of good things that are moving the needle ... and there is limited capacity to take more on," said Edgar Zazueta, executive director of the Assn. of California School Administrators. For schools, the focus needs to be on "how can we successfully implement what we already have on the docket right now."