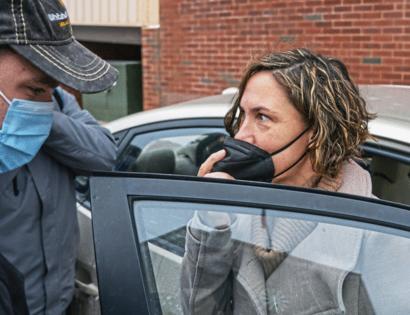 PITTSBURGH — Because there are no cell towers where she lives for GPS monitoring, the U.S. now wants the "pink hat lady" confined to her rural Mercer County home pending trial on charges of smashing into the Capitol on Jan. 6.

A D.C. judge last week ordered that Rachel Powell, a mother of eight originally from Sandy Lake, be on GPS monitoring because she keeps violating pretrial release conditions.

But federal prosecutors said they didn't realize GPS wouldn't work where she is because it's too remote. So on Monday, they asked Judge Royce Lamberth to confine her to her residence with approval to leave only granted by her pretrial services officer in Pittsburgh.

Powell is accused of hefting a massive pipe to bash in a window at the Capitol, then bellowing orders through a bullhorn at other rioters about the layout of the building. She wore a distinctive pink hat in the attack, forever earning her the "pink hat lady" nickname, although some have taken to calling her the "bullhorn lady." Either way, she's facing certain prison time if convicted.

Powell lives on property owned by her boyfriend, Joe Jenkins, who runs a slate roofing consulting company in the Grove City area. The pretrial services office has said that she has repeatedly violated her release conditions by doing unapproved jobs for Jenkins and leaving her house when she isn't allowed to.

Last year, she also wore a COVID-19 mask made out of string in an attempt, prosecutors said, to mock pandemic restrictions and court orders.

The U.S. attorney's office said GPS was the only way to make Powell comply with court orders short of locking her up.

But Assistant U.S. Attorney Lucy Sun said authorities have since learned that the area is too rural, so they want the judge to order her into home detention until the case is resolved. Sun said Powell can still do office work for Jenkins and earn money while she awaits her fate.

Prosecutors insist that Powell is violent and a potential threat. In addition to smashing the window with a 10-foot pipe, an act captured on video, they said she posted on Facebook that the only way to fix America's political system is with "bloodshed."

The FBI said she left her children at home unattended, drove to Washington and stormed the Capitol with the rest of the pro-Donald Trump mob. Then, while the FBI was looking for her, she gave an interview to The New Yorker.

When agents eventually tracked her down and searched her house, they said they found go-bags, ammo and shuriken throwing stars.

Powell is among two dozen people from the Pittsburgh region charged in the insurrection and it's likely that more will end up charged. Just last week the FBI arrested another local, Thomas Carey, 21, of Pittsburgh, who is accused of parading through the Capitol with four associates who met at a right-wing rally.