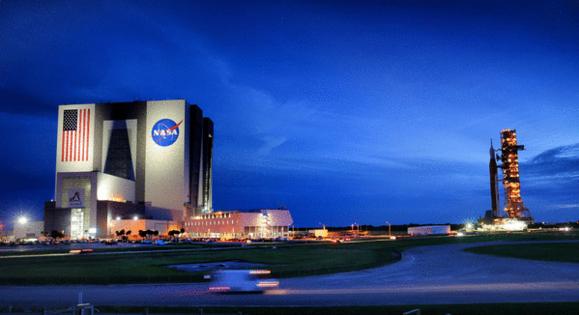 The 5.75 million-pound, 322-foot-tall combination of Space Launch System rocket, mobile launcher and Orion spacecraft endured yet another 4-mile roll atop NASA’s crawler-transporter 2 back to the Vehicle Assembly Building.

It moved into the VAB after 9 a.m. more than 10 hours since leaving the pad.

The much-delayed first mission in the Artemis program using the $4.1 billion rocket and spacecraft will have to wait some more as Hurricane Ian entered the Gulf of Mexico threatening to strike Florida’s Gulf Coast as a major hurricane.

NASA officials had said the rocket could endure 85 mph sustained winds on the launch pad, but the threat of tornadoes, which are expected across the Florida peninsula this week, are among the reasons NASA decided to play it safe.

The trip back to the VAB makes it the third back-and-forth trip for the rocket, which previously headed to Launch Pad 39-B for two wet dress rehearsal tanking tests in the spring, and then most recently rolled back out for attempts to send the rocket up on its first ever flight.

A series of issues at the pad during countdown though forced NASA to scrub two launch attempts. Teams had done repair work on the pad, though, this month after the most recent scrub Sept. 3 and were gearing up for a launch attempt today before Hurricane Ian’s threat came calling. Teams took the Sept. 27 window off the board, and then made the final call to protect the hardware, which took the only other opportunity during this launch window - Oct. 2 - off the board.

By electing to roll back to the VAB, though, NASA will be able to take care of some battery recharging activities including the flight termination system as well as some of the rideshare cubesats that will be deployed when it heads to the moon.

The next available launch windows run from Oct. 17-31, Nov. 12-27 and Dec. 9-23. Each window has only certain days during which the Earth and moon are in the right position for the planned mission.

Artemis I is an uncrewed mission that combines the mobile launcher, Space Launch System rocket and Orion spacecraft. The SLS’s 8.8 million pounds of thrust at liftoff would become the most powerful rocket to ever launch from Earth besting the Saturn V rockets from the Apollo missions.

The Orion spacecraft will be propelled into a trans-lunar injection during which plans are to send it as far as 280,000 miles away, 40,000 miles farther than the moon. It will make several orbits of the moon over several weeks before returning to Earth faster than any human-rated spacecraft has ever attempted re-entry, coming in at 24,500 mph creating heat of 5,000 degrees Fahrenheit.

The goal is to make sure Orion can endure extremes to keep humans safe on future missions. If successful, Artemis II could fly with a crew to orbit the moon in 2024 and Artemis III could fly as early as 2025 to return humans including the first woman to the lunar surface for the first time since Apollo 17 in 1972.