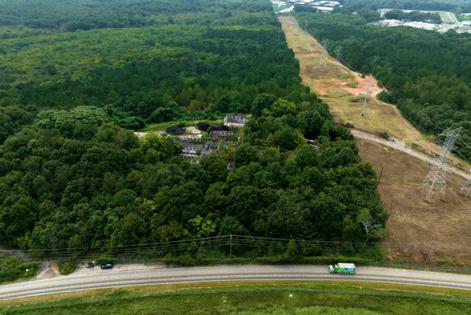 Vandals targeted the Birmingham-area home of M. Miller Gorrie, the chairman of Brasfield & Gorrie, which is a primary contractor for the training center set to be built across 85 acres just outside Atlanta city limits in DeKalb County. The company confirmed Gorrie’s house was targeted, and police said they have opened a criminal investigation.

The incident marked the latest escalation in the saga over the training center since the City Council approved it last year. Far-left activists have vowed to use extreme — and sometimes violent — tactics to pressure those linked to the facility to cut ties with the effort.

The incident happened in the early morning hours of last Friday, according to Thomas Boulware, a police lieutenant in Mountain Brook, Alabama, located just outside Birmingham. The house, two vehicles and some sculptures on the property were targeted, and police are investigating an initial charge of “harassing communications,” Boulware said. The investigation is active and no arrests have been made.

In an anonymous online blog post, the anti-training center activists claimed responsibility for the vandalism at Gorrie’s house. Referring to the company as “brasfield & buttface,” the group said they vandalized the house with paint and damaged two of Gorrie’s cars, including splashing them “with a gallon of laquer thinner.”

“On the driveway we left a message: c u soon. it’s up to you if we make good on this promise… if your dumb company drops the cop city contract then stylish people like us wouldn’t feel so compelled to visit you ever again,” the post stated, referencing the nickname of “Cop City” that activists have given the project.

For months, activists collectively known as “forest defenders” have destroyed or sabotaged construction machinery at the forested site where the training center is planned. Some built treehouses and platforms in the forest in opposition to the training center. Contractors and police officers have been chased off with rocks and other projectiles, including Molotov cocktails.

The activists have also trained their ire at companies that are contracting with the Atlanta Police Foundation to build the facility, including Brasfield & Gorrie. The company’s offices in Atlanta and Cobb County have been vandalized multiple times, and seven people were arrested over the summer after entering a Brasfield & Gorrie construction site on the campus of Georgia State University.

Activists purportedly went to the church of one Brasfield & Gorrie vice president and passed out flyers that, in addition to listing his wife and children by name, informed congregation members that the executive was “choosing to serve mammon over the Lord.”