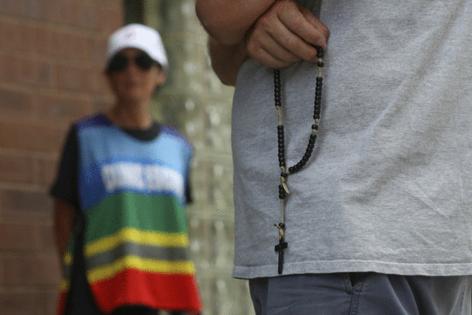 PHILADELPHIA — The arrest of a prominent Catholic activist on charges he assaulted a Planned Parenthood volunteer outside a Philadelphia clinic has sparked a standoff between the antiabortion movement and the federal government, and battle lines are being drawn over the wider significance of the case.

Federal prosecutors have charged Mark Houck — a speaker, author, and cofounder and president of the Catholic ministry the King’s Men — saying he assaulted a 72-year-old patient escort in October outside of the Elizabeth Blackwell Health Center, a reproductive clinic near the intersection of 12th and Locust Streets.

But within hours of his arrest on Friday, his wife had publicly disputed the charges, donations for his legal defense began pouring in, and his story has quickly become a cause célèbre on right-wing news sites.

Even Republican gubernatorial candidate Doug Mastriano weighed in, blasting the case on Saturday as the latest example of what he described as “the continued weaponization of the FBI and persecution by Joe Biden’s DOJ against ordinary Americans.”

The charges — brought under a federal law that makes it a federal felony to injure, intimidate, or interfere with anyone seeking to access a reproductive health-care provider — are routine. The reaction, however, has been anything but, exposing long-simmering tensions between an increasingly politicized segment of the Catholic right and the Biden administration, which has pledged to protect abortion access in the wake of the Supreme Court’s decision to strike down Roe v. Wade earlier this year.

Houck, 48, of Kintnersville, declined to comment on the case, citing the advice of his attorney. The lawyer — John P. Williamson, head of the Pro-Life Union of Delaware County and the host of a weekly antiabortion online radio show — did not return requests for comment Monday.

In filings unsealed Friday in federal court in Philadelphia, prosecutors painted Houck as a physical menace.

They say he twice shoved the 72-year-old — identified in the documents only by the initials “B.L.” — during a verbal altercation while the man was attempting to escort patients inside. Houck stands charged with two counts of assault, which could send him to prison for up to 11 years.

But Houck’s wife, Ryan-Marie, disputed that account, in an interview with the far-right, Catholic antiabortion news outlet LifeSiteNews on the day of his arrest, maintaining that it was her husband who was the true victim.

She said the patient escort had verbally harassed Houck’s 12-year-old son, who’d accompanied him to protest outside the clinic that day. When Houck shoved the man in self-defense, family spokesperson Brian Middleton told the Catholic News Agency on Sunday, the escort fell to the ground and suffered a minor injury that a family spokesperson described as requiring only “a Band-Aid on his finger.”