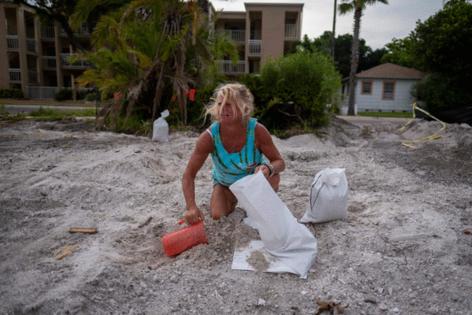 That was his first message during a Tuesday morning briefing in Tallahassee as the storm churned roughly 200 miles south of the Florida Keys, and slowly moved north at about 12 miles per hour into the Gulf of Mexico as a Category 3.

“There is still uncertainty with where the exact landfall will be, but just understand the impacts are going to be far, far broader than just where the eye of the storm happens to make landfall. In some areas, there will be catastrophic flooding and life-threatening storm surge,” DeSantis said.

The 500-mile wide storm, with sustained winds of roughly 125 miles per hour, is expected to intensify into a Category 4 storm and impact the entire state. The National Hurricane Center is predicting landfall near Venice. While nearly the entire coast of the state could see storm surge, Tampa Bay could see 5 to 10 feet of water above dry land and up to 2 feet of rain.

DeSantis urged Floridians to heed the warnings of local and state officials, and said over 2 million people are under some type of evacuation order.

Roughly 90 nursing homes and assisted-living facilities have also been evacuated, state officials said, though it is unclear exactly how many residents were evacuated from those locations.

“Mother Nature is a very fearsome adversary so please heed the warnings,” he said. “You don’t need to evacuate to another state. You don’t need to go hundreds of miles away. There are shelters that are open at all of these counties at this points.”

“If you’re under an evacuation order, evacuate to higher ground,” he said. “That is going to be safe from the type of surge and flooding that we’re hearing with this storm.”

During the morning briefing Florida Emergency Management Director Kevin Guthrie, stressed that Tampa is not yet out of the woods, and it should still expect to have “storm surge.”

Guthrie urged Floridians in the southwest counties to evacuate to Palm Beach, Broward and Miami-Dade.

NEW YORK — An overdose victim whose corpse was dumped on a Bronx sidewalk was identified Thursday as the son of a onetime Copacabana bouncer played by Viggo Mortensen in the Oscar-winning movie “Green Book.”