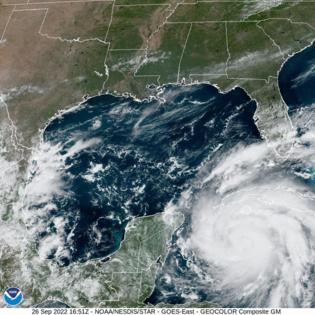 Ian is expected to move over the warm waters of the Caribbean Monday and rapidly intensify before making its way into the Gulf of Mexico, the National Hurricane Center said Monday.

Forecasters said Ian could bring strong winds and dangerous storm surge along the west coast of Florida, including the Tampa Bay area beginning Wednesday. The National Hurricane Center has a hurricane watch and storm surge watch in place from Englewood to the Anclote River, which includes all of Tampa Bay.

As it moves around, Ian will leave many regions feeling its wrath, notably through storm surges. Here’s what you need to know about storm surge and its risks to Florida.

What is storm surge?

Storm surge occurs when there’s a departure from normal tide levels, said Pablo Santos, a meteorologist at the National Weather Service in Miami.

“Whatever amount of water you end up with, that is above or beyond the regular tide is storm surge,” Santos said.

A storm’s intensity, its wind field and the topography of the coast all affect the severity of the rise in water, Santos said. Over time, winds push water toward the coast, which causes flooding. And a slowing storm — like Hurricane Ian — can be a problem.

“A storm that is moving very slowly as it’s approaching the coast, has more time to keep pushing the water further inland as it’s crossing the coast,” he said.

Does storm surge happen when the storm nears the coast?