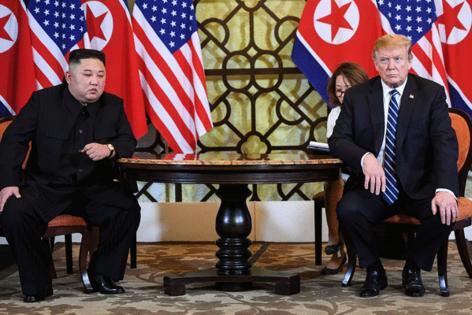 Journalist Maggie Haberman revealed that the twice-impeached president took letters from the North Korean dictator when he jetted to Mar-a-Lago, his Palm Beach, Florida, resort, on the day President Joe Biden was inaugurated.

“Most of it is in the archives, but the Kim Jong-un letters … we have incredible things,” he told Haberman, according to an article she penned in The Atlantic promoting her forthcoming book, “Confidence Man: The Making of Donald Trump and the Breaking of America.”

The interview with Trump was conducted before the FBI search of Mar-a-Lago on Aug. 8, which turned up some 10,000 government documents and more than 100 classified documents.

Despite improperly making off with the cache of documents, Trump insisted to Haberman that he didn’t really remove anything important.

”Nothing of great urgency, no,” he told Haberman, who usually writes for The New York Times.

Federal prosecutors are investigating possible violations of the Espionage Act, mishandling classified documents and obstruction of justice in the Mar-a-Lago document search.

Although Trump scored a temporary victory by having a special master appointed to review the seized documents, Raymond Dearie, the veteran federal judge appointed as special master, said Trump’s team was trying to “have its cake and eat it” too, and that he was inclined to regard the records the way the government does: classified.

Dearie followed up with his own order, giving the Justice Department until Monday to submit an affidavit asserting that the FBI’s detailed inventory of items taken in the search is accurate. Trump’s team will have until Sept. 30 to identify errors or mistakes in the inventory.