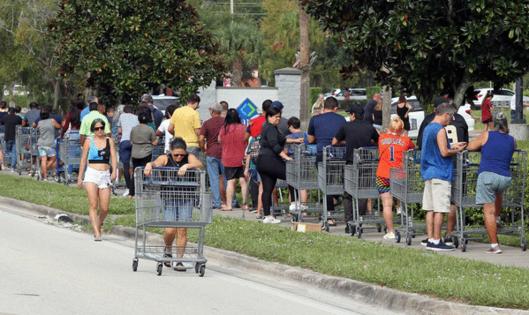 MIAMI — A large swath of Florida’s Gulf Coast is under hurricane and storm surge watches Monday from Hurricane Ian, which whipped up overnight and is expected to turn into major storm as it heads toward a potential first landfall in western Cuba.

The latest forecast showed Hurricane Ian crossing north of Tampa Bay as a powerful Category 3 storm and making landfall in the big bend as a Category 1 or 2 storm. But regardless of any future small shifts in the track, which forecasters warned could continue for the next few days, much of Florida’s Gulf Coast, from Naples northward, faces a major risk of storm surge.

The Tampa Bay metro area, home to some 3 million people, is particularly vulnerable to coastal flooding from hurricanes,

Southeast Florida is no longer in the cone, but the Lower Keys also remain under a tropical storm warning and the National Hurricane Center warned the region will see heavy rains this week, as well as gusty squalls from the strong storm.

New tropical storm watches were issued Monday for Lake Okeechobee and the middle Keys, and the watch on the west coast was extended southward to Flamingo.

Overnight, Ian became a well-organized hurricane, and forecasters expect it will rapidly intensify to a monster — Category 3 — on Monday before crossing Cuba’s west coast early Tuesday.

Tampa issued its first mandatory evacuation order, for Zone A, Monday morning. Zone B is under a voluntary evacuation. More orders could follow for other parts of the west coast, and all counties in Florida remain under a state of emergency.

As of the 11 a.m. update, Hurricane Ian was a Category 1 storm about 100 miles west of Grand Cayman and about 240 miles southeast of the western tip of Cuba. It’s maximum sustained winds had started to pick up, now reaching 80 mph, and it’s wind field expanded to 115 miles from the center. It was heading northwest at 13 mph.

Ian’s forecast track, which shifted slightly east again in the latest update, showed the hurricane passing near or west of the Cayman Islands, and then near or over western Cuba Monday night and early Tuesday as a Category 3 storm.

Starting Monday morning the storm hit a patch of ocean with super warm water and low wind shear — everything it needs to get much stronger, quickly.