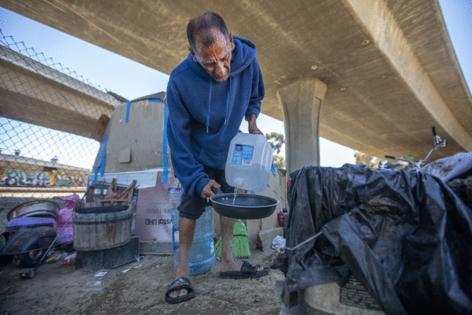 LAHSA said there were no unsheltered people — no tents, no inhabited cars or RVs and no people living outdoors — in the northwest quarter of Venice, which is notorious as ground zero for homelessness.

It wasn't just the number — so wildly wrong it couldn't be a statistical error — that shocked them.

How, they wondered, had LAHSA blown the most closely watched census tract in the county, one scoured regularly by residents conducting their own tallies and more recently by a team of professional surveyors working for the Rand Corp.?

LAHSA did not respond to questions about the Venice numbers but released a statement Friday evening defending the integrity of the count.

"During the Count, we received several reports of user and technological errors resulting from a lack of training and poor internet connectivity," said Ahmad Chapman, LAHSA's communications director, in the statement. "Despite these errors, we are confident in the accuracy of this year's homeless Count because LAHSA and its partners took several steps to account for what was happening in the field."

Whether the result of human error or a systemic flaw, the botched Venice count has heightened criticism of the annual point-in-time count as inaccurate.

"I just don't think a point-in-time count makes sense of really helping people," said Connie Brooks, a Venice resident who participates in the unofficial counts that consistently show more than 200 homeless people in the area.

In City Hall this week, Council President Nury Martinez introduced two motions asking for an audit of this year's count, which was conducted over three days in February, and those of previous years and an evaluation of whether to hand future counts to a third party.

One of the motions cites wide disparities in the increase or decrease of homelessness in various parts of the city since the last count in 2020. Although the average across the city was a modest 1.7% increase, some council districts had large swings; the most extreme were an 80% increase in a west San Fernando Valley district and a 40% decrease in the Westside district that includes Venice.