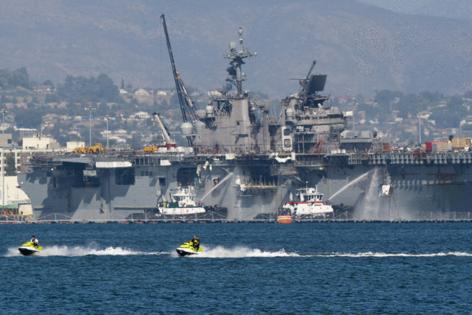 SAN DIEGO — Navy prosecutors rested their case Friday against the 21-year-old sailor accused of starting the devastating fire on the amphibious assault ship Bonhomme Richard, just 1,000 feet from where the $1.2 billion warship burned more than two years ago.

Seaman Recruit Ryan Sawyer Mays, a 19-year-old deck seaman on the ship at the time of the fire, is charged with aggravated arson and the willful hazarding of a vessel.

Mays denies starting the blaze. He faces life in prison if convicted.

With no eyewitness to anyone setting the fire, Capt. Jason Jones told the military judge Friday that he and fellow prosecutors had met their burden to proceed with the case in response to a defense motion to find Mays not guilty at this juncture in the trial. Mays had the motive and opportunity to start the fire, Jones said, and circumstantial evidence is still evidence — especially in an arson case where the crime scene was destroyed.

An investigator from the U.S. Bureau of Alcohol, Tobacco, Firearms and Explosives testified earlier in the week that the fire was set intentionally in that lower storage area, called the "lower V," just after 8 a.m. that morning.

Petty Officer 2nd Class Kenji Velasco, who was also a deck seaman at the time, is the only witness placing Mays at the scene near when investigators say the fire began. He said he saw a person he believes to be Mays, wearing a face mask, hat and "boot camp" coveralls. Velasco said the person was the same build as Mays and that Mays stood out among Deck Department sailors for wearing that type of coverall, as most wore a different, flame-resistant coverall uniform on board.

Velasco said the person was carrying a metal bucket with both hands and passed about 7 feet from him.

"I love Deck," the person said as he passed, according to Velasco.

Velasco said he recognized Mays' voice but wasn't sure Mays was on duty that day. He said on July 13, 2020 — the day after the fire — he called a Deck Department duty supervisor to find out. During that call he told Boatswain's Mate 2nd Class Beau Benson he'd seen someone in boot camp coveralls head into the lower V just before the fire and asked if Mays was on duty.