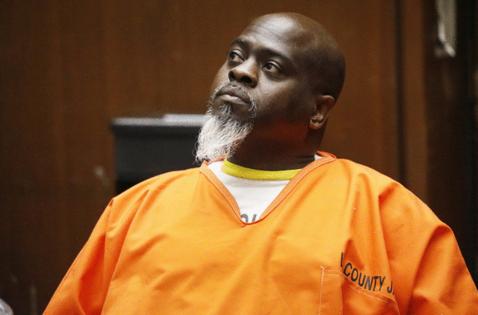 LOS ANGELES — Richard Lathan wasn’t sure how to react when he got a letter in July informing him that the Los Angeles police detective who helped put him in prison for murder had made a racist remark about Black people.

A glimmer of optimism that the revelation could win him a new trial collided with the profound anger he felt about the more than three decades he has spent in prison for a crime he says he didn’t commit. Lathan had always suspected the detective, Brian McCartin, targeted him simply because he was Black and a gang member.

And something else about the letter bothered Lathan: It said McCartin, who is now retired, made the remarks in 2014. The Los Angeles County district attorney’s office, however, didn’t notify Lathan about them until this summer — eight years after prosecutors first learned of the comments and four years after the Los Angeles Times published a front-page story detailing them.

Why, he wondered, hadn’t he been told sooner?

It is a basic rule of the U.S. justice system that prosecutors must turn over to defendants evidence that could help exonerate them, including information that calls into question the credibility of police officers involved in their cases. Failure to disclose such information — called Brady material, after Brady vs. Maryland, the landmark 1963 Supreme Court ruling that established the rule — can result in a conviction being thrown out or a new appeal granted.

How this obligation is carried out, however, is less clear, as law enforcement officers often fight to keep allegations of misconduct under wraps and prosecutors serve as gatekeepers, deciding whether or not to disclose information.

Sometimes it is obvious when information needs to be shared, such as when an officer or deputy has a record of lying. But with McCartin, the district attorney’s office seesawed for years over what to do.

Initially, prosecutors under District Attorney Jackie Lacey dismissed his comments as innocuous, saying they didn’t reflect a bias against Black people. Then George Gascón took office in 2020 and decided otherwise, finding that McCartin was among several other law enforcement officers whose conduct needed to be disclosed.

The Times contacted several officials from Lacey’s administration who probably would have been aware of McCartin’s comments, but none responded. It is unclear whether Lacey, who did not respond to a request for comment, knew of them.

Attempts to reach McCartin, who left the LAPD in June 2015, were unsuccessful.