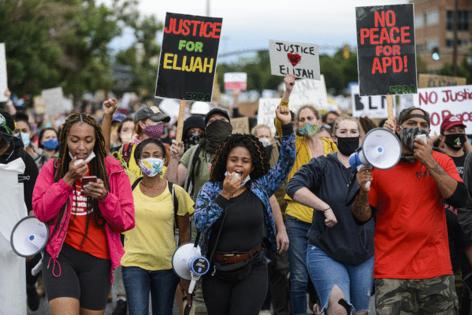 DENVER — The Adams County coroner’s office changed Elijah McClain’s cause of death from “undetermined” to ketamine toxicity after reviewing additional evidence during the grand jury investigation into his death, according to an updated autopsy report released Friday.

“I believe that Mr. McClain would most likely be alive but for the administration of ketamine,” forensic pathology consultant Stephen Cina wrote in the updated autopsy report.

The manner of McClain’s death — such rulings can include homicide, accidental or natural — remains undetermined.

McClain, 23, died in 2019 after three Aurora police officers violently arrested him — though he had committed no crime — and two paramedics injected him with the powerful sedative ketamine.

Former Adams County District Attorney Dave Young declined to charge the officers and paramedics in connection with McClain’s death, citing in part the autopsy’s finding that the cause of death was undetermined. But a statewide grand jury in 2021 indicted the five men on charges — including criminally negligent homicide — following intense scrutiny during the 2020 police brutality protests.

Adams County Coroner Monica Broncucia-Jordan released the updated autopsy Friday after a lawsuit filed by Colorado Public Radio and other local news outlets. She initially denied a request for the autopsy because it included information from the grand jury that is not public record.

Two judges weighed in on the matter and ruled she could release the information.

“Openness and transparency are at the heart of good government,” Broncucia-Jordan said in a news release. “I believe in the public’s right to information and want to be transparent about the work done in my office. I also respect the rule of law and want to ensure nothing is released that will violate any court order or potentially jeopardize the prosecutions in this case. That is why it was imperative to have the Denver District Court weigh in.”

Transgender and nonbinary teens and young adults — who experience anxiety and depression at higher rates than others — often feel less mental distress after surgery to remove their breasts, according to a study out of ...Read More

WASHINGTON — The congressional committee investigating the Jan. 6 attack on the U.S. Capitol and former President Donald Trump’s efforts to undo the 2020 election is seeking new evidence, just days before the next ...Read More

Russian President Vladimir Putin has granted citizenship to whistleblower Edward Snowden, who has been living there since 2013 when he leaked information about U.S. surveillance programs.

Speaking at an event sponsored by McConnell’s ...Read More

A San Francisco firefighter seen wearing a T-shirt while on duty with the conservative catchphrase "Let's Go Brandon" written on it violated department policy, a spokesman said.

The city employee was captured in a photo ...Read More