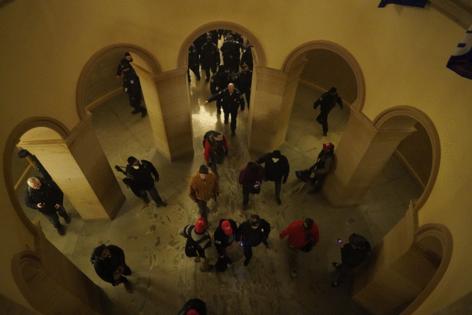 ATLANTA — A Rabun County man will spend 45 days in jail and three years on probation after a federal judge on Friday told him she was unconvinced that he was remorseful for participating in the Jan. 6, 2021, U.S. Capitol riot.

Blas Santillan, a 27-year-old amateur mixed martial arts (MMA) fighter, was caught on video during the riot emerging from the Capitol Rotunda and exhorting the crowd to action.

“I’m the only one that was willing to kick that door. Who else is willing to storm in there?” he shouted. “You are used to sitting on your couch and watching your Netflix and listening to your shows and watching YouTube. You do not know what freedom is. ... Freedom is doing what you want!”

“I am very sorry for how I reacted to the situation and the involvement that I had in the Capitol,” he said. “I feel like everybody lost that day.”

Assistant U.S. Attorney Christopher Amore said his interview with the FBI prior to sentencing on Friday showed “he doesn’t have a full comprehension” of his role in the riot.

“He claimed that the police officers didn’t have an issue with the rioters,” Amore said. According to the U.S. Department of Justice, 140 police officers were assaulted during the riot, which caused more than $2.7 million in damages to the Capitol.

Although video evidence showed that Santillan did not assault police or cause damage, Amore noted that he remained in the Rotunda for 45 minutes until a squad of police in riot gear arrived and cleared the area. “He was not a passive bystander, but an eager participant,” Amore said.

Santillan was arrested at his home in Clayton seven months after the riot. He accepted a deal to plead guilty to one of the four misdemeanors with which he was charged in May.

He will not have to start serving his sentence for a while. Judge Pan allowed him to report to jail following a planned MMA bout in Tupelo, Mississippi, Nov. 5. In comments to the judge, Santillan said becoming a professional MMA fighter was his career goal.