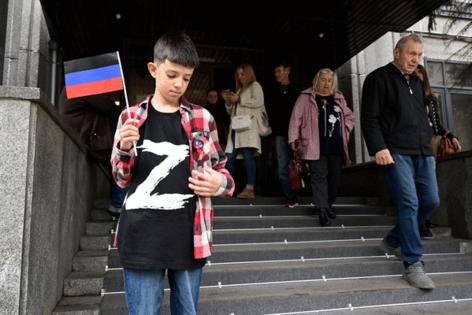 Russia on Friday began staging U.N.-condemned “votes” on annexing the roughly fifth of neighboring Ukraine it occupies in a step that marks a new escalation in the spiraling conflict between President Vladimir Putin and the U.S. and its allies.

Russian state media reported overwhelming support for accession to Russia in the four regions that its troops partially control, according to an opinion poll this week. In Moscow, officials vowed to move quickly to finalize the absorption of the territories.

The Kremlin ordered the “referendums” this week after its forces suffered their worst defeats to Ukraine’s military since the early weeks of their seven-month invasion. Putin this week ordered a “partial mobilization,” calling up 300,000 reservists, and renewed threats that he’s ready to use Russia’s entire military arsenal to protect its “territorial integrity.”

Western officials denounced the threats as irresponsible, calling the votes and mobilization signs of Kremlin desperation. The U.S. and its allies vowed to continue financial and military support for Kyiv, which is pressing its counteroffensive to retake more territory held by Russia.

“Russia is burying the prospects of negotiations with its own hands,” Ukrainian President Volodomyr Zelenskyy said in his nightly address late Thursday. Peace talks have been moribund for months.

Despite the U.N.’s condemnation, Russian officials defended the votes as in line with international law. It conducted a similar hasty referendum in Crimea in 2014 after it occupied that peninsula from Ukraine but only a tiny number of countries have followed Moscow’s lead in recognizing the results.

Russian troops don’t fully control the territory of any of the four regions where the votes are being held and fighting is raging in all of them. The head of the self-styled Donetsk People’s Republic, Denis Pushilin, late Thursday warned that the security situation was worsening drastically in the north of the region as Ukrainian forces press their advance, even as he called on residents to vote.

The Kremlin’s proxy leaders made little pretense of suspense about the outcome. Kirill Stremousov, a top occupation official in Kherson, said, “A massive majority has decided their fate — life inside Russia,” in a video address on Telegram. Pushilin proclaimed: “We’re coming home!”

Election officials are going house-to-house to collect ballots over the next few days, with polling places scheduled to open until the votes conclude on Sept. 27 in parts of the Donetsk, Luhansk, Zaporizhzhia and Kherson regions.

The Kremlin is also distributing hundreds of thousands of ballots within Russia for people dislocated from the regions. In addition, authorities have said they’ll use electronic voting, a technique that’s been implicated in widespread fraud when applied in Russia.

“We’ve reached the point of no return with these referenda,” said Alexei Chesnakov, a former senior Kremlin official and adviser on Ukraine policy. “It’s already impossible to go back. Putin is showing the West that we’re ready to go all the way.”

The mobilization of 300,000 reservists, which has prompted a rush by men who face the draft to leave the country, isn’t enough to change the balance of forces and will only stop the Ukrainian advance, Russian military experts say. Moscow’s forces have been plagued by low morale and equipment shortages.

The Kremlin is counting on disruptions of energy supplies over the winter to pressure Europe to get Kyiv to sue for peace but support for Ukraine has only strengthened since the battlefield gains and Russia’s escalation in response.

Neither side in the conflict is ready to back down, which increases the risks tensions may spin out of control, said Alexander Baunov, a senior fellow at the Carnegie Endowment for International Peace.

“Russia knows it is losing,” he said. “If you lose, you either seek a reasonable exit or you can threaten to go further and further.”

Transgender and nonbinary teens and young adults — who experience anxiety and depression at higher rates than others — often feel less mental distress after surgery to remove their breasts, according to a study out of ...Read More

WASHINGTON — The congressional committee investigating the Jan. 6 attack on the U.S. Capitol and former President Donald Trump’s efforts to undo the 2020 election is seeking new evidence, just days before the next ...Read More

Russian President Vladimir Putin has granted citizenship to whistleblower Edward Snowden, who has been living there since 2013 when he leaked information about U.S. surveillance programs.

Speaking at an event sponsored by McConnell’s ...Read More

A San Francisco firefighter seen wearing a T-shirt while on duty with the conservative catchphrase "Let's Go Brandon" written on it violated department policy, a spokesman said.

The city employee was captured in a photo ...Read More