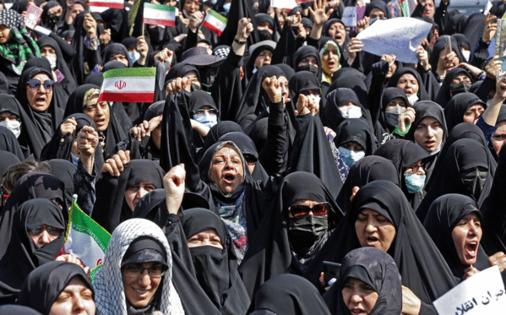 Iran threatened to prosecute anyone involved in “illegal gatherings,” as authorities sought to head off spiraling unrest over the death of a woman detained by the country’s so-called morality police.

The Ministry of Intelligence said the blanket order was due to “exploitation of recent events by anti-revolutionary currents,” according to the semi-official Tasnim news agency.

Protests started last Friday after the death of 22-year-old Mahsa Amini, who fell into a coma after her arrest for allegedly breaking Islamic dress codes. At least 17 people have died so far.

The “morality police” units — formally known as Guidance Patrols — have long been highly unpopular, but the protests are the first major rebuke of their actions. Their minivans are often parked at busy junctions and squares, where female officers clad in the all-enveloping black “chador” and head scarves stop passersby who they deem to be “immodestly” dressed.

Amini, who was visiting the capital Tehran with her family from a small town in western Kurdistan province, was picked up by one such unit, put in a van and driven to a police station.

Police said she then suffered “heart failure,” entered a coma and died two days later in hospital. Her family say she was beaten and the assault covered up. They’ve demanded a full account of what happened to Amini, saying she had no underlying health conditions.

As protests continued, state TV was dominated on Friday by footage of pro-regime rallies against what it described as “riots,” as well as the funerals of security service members killed in the unrest and reports on alleged damage to public property.

Police arrested 211 people in the northern province of Gilan and around 40 in Pakdasht on the outskirts of the capital Tehran over the protests, according to the semi-official Fars news agency. In the eastern city of Tuyserkan, eight people were detained and 58 summoned for questioning.

The Shargh daily newspaper said three Iranian journalists were arrested on Thursday, including its own Niloufar Hamedi, adding the reason for their detention was unknown.

Iran’s President Ebrahim Raisi said while attending the United Nations General Assembly in New York that he’d been in touch with Amini’s family and ordered a probe into her death. He condemned the protests as “acts of chaos.”

The U.S. Treasury sanctioned the morality police on Thursday for what it described as the group’s violence against women and violation of the rights of peaceful protesters.