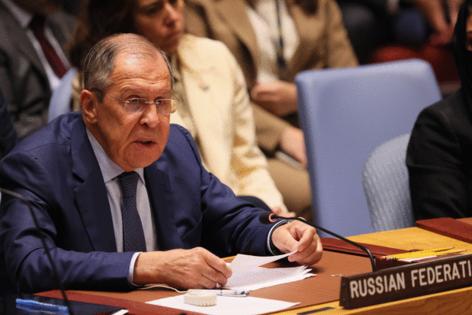 UNITED NATIONS — Signaling that the Russian war in Ukraine has triggered an existential crisis for the United Nations, several of its key members on Thursday harshly denounced Moscow's actions, but failed to take new steps to stop the bloodshed and food, energy and humanitarian crises unleashed worldwide.

And in a separate action, the Biden administration imposed economic sanctions Thursday on Iran's notorious "morality police" in response to the death of a young woman in their custody. The unusual move by the U.S. — sanctions typically target military and political entities, not social-control bodies in Iran — came a day after Iranian President Ebrahim Raisi addressed the U.N. General Assembly.

Raisi sought to deflect international outrage amid widespread street protests in Iran over the death of Mahsa Amini, an Iranian Kurd who was reportedly arrested because her government-obliged headscarf failed to completely cover her hair. Raisi refused to acknowledge any wrongdoing, citing instead the human rights abuses of the U.S. and other Western countries.

Iran's morality police are men who enforce dress codes and other restrictions on women and broader society. The new U.S. sanctions include some law enforcement figures in response to Iran's crackdown on the protests over Amini's death — repression that has killed several more people.

"The Iranian government needs to end its systemic persecution of women and allow peaceful protest," U.S. Secretary of State Antony J. Blinken said. "The United States will continue to voice our support for human rights in Iran and hold those who violate them to account."

Accountability, whether for Iran over punishment of dissent or for Russia over alleged atrocities in Ukraine, was front and center at this week's annual U.N. General Assembly as participants discussed a world mired in seemingly insurmountable troubles.

With leaders from around the world convening in New York, delegates used an extraordinary meeting of the United Nations Security Council, the U.N.'s governing body, to chastise Russian President Vladimir Putin for breaking key international rules — those at the foundation of the U.N. — in his ruthless assault on Ukraine.

Russia "is violating the very rules this body was created for," said the foreign minister of Lithuania, Gabrielius Landsbergis, in one of a catalog of speeches delivered by the council's 15 members and Ukraine.

In a show of support for Ukraine, Landsbergis wore a blue-and-yellow wristband — the colors of its flag — with his dark suit.

"The very international order that we have gathered here to uphold is being shredded before our eyes," Blinken said. "We cannot — we will not — allow President Putin to get away with it."