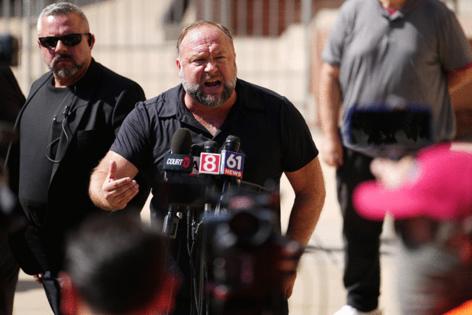 Right-wing broadcaster Alex Jones’ first day on the stand at his Sandy Hook defamation trial gave way to chaos and confusion Thursday with the conspiracy theorist calling the judge a “tyrant” and the proceedings “a kangaroo court.”

The day ended with Judge Barbara Bellis of Connecticut Superior Court wondering, “How are we going to avoid this problem tomorrow?”

At times rambling, despite being told to speak in turn, Jones, 48, insisted that he’s already apologized to the families of students and educators gunned down in 2012 in a Connecticut grade school and was “done apologizing.”

“Like it’s my fault,” he flippantly remarked on the witness stand. “People think I killed the kids.”

The bombastic commentator, who promoted the lie that the 2012 Sandy Hook school shooting was a hoax, testified throughout the day.

The Connecticut trial, taking place a month after a jury in his home state of Texas determined that Jones and his company should award two parents nearly $50 million, is to determine how much he will have to pay the families of victims impacted by his lies.

Jones is being sued by eight more Sandy Hook families in the Connecticut case.

After the jury was dismissed around 4 p.m. Thursday, Bellis explained to Jones’ attorney that she can’t rule on his objections if they’re made while Jones is still ranting, despite being told repeatedly to control himself.

Jurors over the past week have heard testimony from relatives of slaughtered kids and adults claiming Jones’ followers have threatened and harassed them in the aftermath of the “Infowars” host’s comments.

Right off the bat Thursday, Jones seemed to annoy Bellis — who had earlier joked that she was going to call in sick for his testimony — by saying that he didn’t think this was an important case.