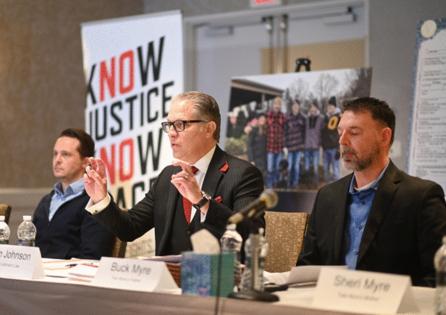 DETROIT — An attorney representing families of four students slain and others wounded in the Nov. 30 Oxford High School shooting said Thursday the 15-year-old shooter did show troubling signs that were noted to school officials.

"From the beginning of school, Ethan Crumbley was evidencing signs of being a highly troubled individual to say the least," Detroit Attorney Ven Johnson said during a news conference alongside parents of victims Justin Shilling, Keegan Gregory and Tate Myre. "There weren't warning signs. There were stop signs everywhere, especially on Monday the 29th and Tuesday the 30th (of November 2021)."

During an hour-and-a-half news conference, Johnson detailed four red flags deriving from depositions of six Oxford High School officials that they believe could have prevented the tragedy had corrective action taken place.

Specifically, Johnson detailed that Crumbley turned in drawings and filled out assignments that showed "violent" responses. Teachers alerted counselors and school officials that Crumbley was looking at bullets and videos of gunning down crowds while sitting in class even up to the day of the tragedy.

Johnson's firm has several related lawsuits pending in Oakland Circuit Court and federal court. Johnson said he wants to argue the unconstitutionality of Oxford Community Schools — or any government body — "to hide behind governmental immunity."

Oakland County Circuit Judge Rae Lee Chabot had previously ordered attorneys into mediation on the issues, but after they reported being unable to resolve matters, she told attorneys in July they have 60 days to comply with depositions from six school employees named as defendants: Pam Parker Fine and Shawn Hopkins, both school counselors; Nicholas Ejak, dean of students; and teachers Jacquelyn Kubina, Becky Morgan and Allison Karpinski.

"All of this should have been revealed by Oxford Community Schools. This should have been part of an investigation done by the attorney general or whoever they chose," Johnson said. "These parents had no information other than what was revealed at the press conferences."

Oxford Community Schools could not be reached for comment Thursday regarding the following claims.

The initial warning sign was in the first week of school in August, Johnson said, showcasing a note card with a self-portrait drawing that was a class assignment and returned to his teacher. The drawing had what appeared to be a building to the left of a self-portrait of Crumbley wearing glasses, but the teacher said later it could be a magazine filled with bullets. A faint outline of a gun could be made out after Crumbley erased it from the self-portrait.

"She (the teacher) claims she never saw this drawing until Monday, the day before the shooting, but this drawing was in her classroom and one of the first assignments she gave to those kids in the school year," Johnson said. "She admitted it looked to be a magazine full of bullets and if she had saw it at the time she would have done something about it."