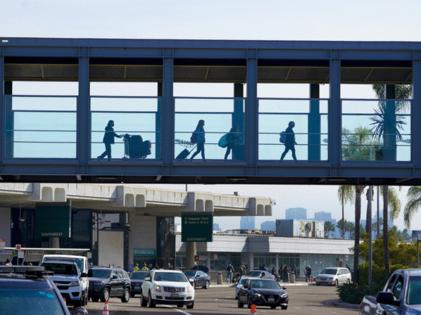 The security breach happened about 12:25 p.m., according to the Transportation Security Administration. Officials said the man went through the airport's baggage screening process, but then a TSA officer identified a bag that required additional inspection.

This kind of screening can happen if a TSA officer wants to take a closer look after spotting something on the luggage X-ray screen.

The man did not wait for the additional screening to take place, and continued into the airport, officials said. TSA officers began searching for the traveler, but were not able to locate him immediately.

As a result, TSA officials evacuated Terminal 2 West and East so they could search the area.

"Law enforcement canines and TSA are currently conducting a sweep of the terminal, TSA officials said in a statement. "Once that is complete, TSA will begin rescreening all travelers once the terminal is clear of any potential security threats."

Airport officials said the Federal Aviation Administration grounded all flights departing from the terminal while the TSA conducted its search. It's unclear whether the man was found.

Around 3:15 p.m., travelers were allowed back into the terminal, and flights resumed. Officials estimated bout 5,000 to 7,000 would need to be re-screened.

"It's going to be extremely busy over the next several hours," said TSA spokesperson Lorie Dankers. "Pack your patience."