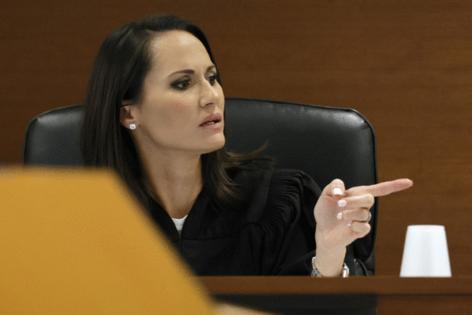 Defense lawyers have been tight-lipped about their strategy to try to persuade a jury to show mercy to Nikolas Cruz, 23, who pleaded guilty last October to 17 counts of first-degree murder. The jury is tasked with deciding whether the defendant is sentenced to death or to life in prison.

Zachary Cruz, 22, was not in court Thursday, but his attorney, Amina Matheny-Willard, told Broward Circuit Judge Elizabeth Scherer that he was reluctant to answer pretrial questions posed by Broward County prosecutors.

“We are very leery of Broward County’s intentions,” Matheny-Willard said, accusing Broward law enforcement of collaborating with a sheriff’s office in the Virginia county where Zachary Cruz has lived since the middle of 2018.

Officials for a company called Nexus Services stepped in weeks after the shooting when Zachary Cruz was arrested for trespassing on the Stoneman Douglas campus. A judge set bail at $500,000, an abnormally high amount considering the offense was a minor misdemeanor. The move to Virginia was part of the deal that got the trespassing case dismissed.

A former executive of that company, Richard Moore, is also on the defense witness list and may end up testifying — public records show Moore has been in contact with the defendant. Moore considers himself Zachary Cruz’s guardian.

Scherer ordered Moore and the defendant’s brother to answer the prosecutors’ pretrial questions.

Danielle Woodard, the defendant’s half-sister, is also on the witness list and may testify as early as Monday. Woodard, 35, is being transferred to Broward from a jail in Miami, where she is awaiting trial on a carjacking charge.

The defendant’s biological mother, Brenda Woodard, was arrested in 1998 for buying crack cocaine. She was five months pregnant with Cruz at the time. Cruz and his brother were adopted and had no relationship with their mother or half-sister. Brenda Woodard died last year, but Cruz’s half-sister could testify about her mother’s history and her alcohol and drug use during her pregnancy.

Defense lawyers are dropping some of their mental health arguments but planning to proceed with others. In Florida, it takes a unanimous jury to authorize a death sentence but just one dissenting juror to derail it in favor of life in prison.

The jury that will determine Cruz’s sentence returns to the courtroom Monday.