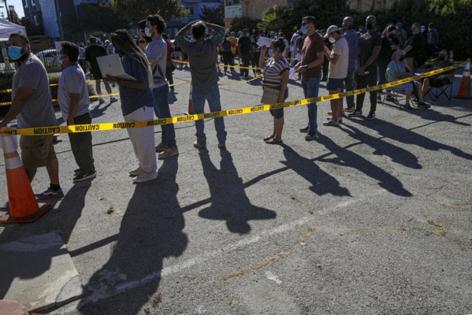 In late June — about a month after the first California case was confirmed — monkeypox DNA was detected in wastewater in San Francisco, according to the WastewaterSCAN coalition, a group of scientists who have been testing sewage for the presence of the coronavirus since 2020.

The group recently confirmed the presence of the monkeypox virus in Los Angeles County waste.

"It helps understand how widespread this is," said Stanford civil and environmental engineering professor Alexandria Boehm, one of the lead researchers on the WastewaterSCAN team.

She said COVID-19 sewage testing has been particularly useful during "the onset phase," or immediately after a new variant has been identified but it's unclear the extent of its presence. Public health officials can use the information to theorize how great the spread could become.

"We're sort of in that (phase) for monkeypox now," Boehm said.

Monkeypox DNA was first detected in Los Angeles County wastewater July 31, about 20 days after the WastewaterSCAN group expanded its monkeypox testing beyond the Bay Area to almost 40 other facilities nationwide — including in L.A. — according to data from the group.

Samples from L.A.'s Joint Water Pollution Plant in Carson, which serves about 4 million residents and businesses, showed a small presence of the monkeypox virus July 31 and for three days during the first week in August, according to WastewaterSCAN data. The virus since has not been detected there, despite rising monkeypox cases in Los Angeles County.

By comparison, monkeypox DNA has been detected almost every day since June 27 at two wastewater facilities in San Francisco — and at much higher levels than in L.A. County.