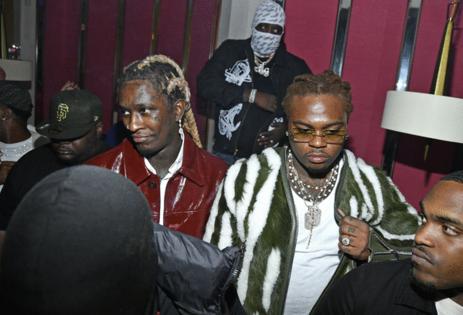 ATLANTA — At least one associate planning to testify against Atlanta rapper Young Thug is in protective custody after a document posted online showed his willingness to cooperate, state prosecutors said.

Fulton County prosecutor Don Geary on Thursday asked the judge presiding over the racketeering case to further restrict the disclosure of certain evidence ahead of next year’s trial, saying a page from discovery that was recently shared online jeopardizes the safety of the state’s witness.

“We found a lot of information concerning one of our witnesses on basically a (celebrity news) outlet,” Geary told Superior Court Judge Ural Glanville.

Young Thug, whose real name is Jeffery Williams, is one of 28 people charged in a sweeping indictment alleging the chart-topping rapper is the leader of a criminal street gang. Rapper Gunna, whose real name is Sergio Kitchens, is also charged in the racketeering and gang case. Both men have been in jail since their May arrests.

The musicians are accused of conspiring to violate Georgia’s criminal racketeering law, but the indictment outlines more serious crimes allegedly carried out by “Young Slime Life” associates ranging from drug possession to murder.

Thursday’s hearing wasn’t the first time prosecutors have raised concerns about the safety of state’s witnesses ahead of what is likely to be a high-profile trial. Glanville previously issued a temporary order instructing defense attorneys to withhold witness contact information from their clients.

In a motion filed Monday, Fulton County District Attorney Fani Willis asked the judge to order attorneys to avoid sharing discovery material with anyone outside their defendants’ legal teams.

Willis said the state recently shared its discovery evidence with attorneys, including “the names of all lay witnesses (and) cooperating YSL associates that will be called to testify in this case.”

“Since the date of those filings, however, information from the state’s discovery material has appeared on public websites,” Willis wrote in her motion.