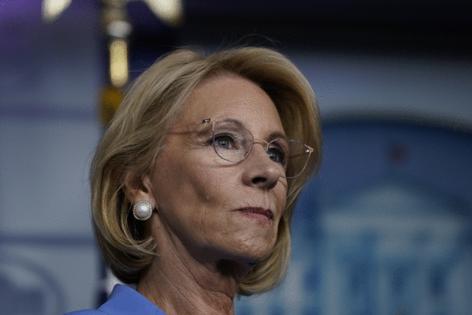 DeVos said that the first time she met Biden in early 2019 she had recently broken her pelvis and was using a wheelchair.

Biden put his hands on her shoulders and his forehead on her forehead "for several seconds," DeVos said during an appearance on Megyn Kelly's podcast, adding she had "nowhere to go to or escape."

"If he had done that as a student on a college campus under his proposed rule, I would have a Title IX sexual harassment allegation to levy against him," DeVos said on Kelly's SiriusXM show.

At the time of the encounter, DeVos was the U.S. secretary of education under then-President Donald Trump. DeVos is part of a wealthy west Michigan family that has been major financial boosters of GOP candidates and policy priorities.

In June, the Biden administration proposed reinstating Title IX regulations rolled back under Trump and DeVos that would strengthen protections for people claiming discrimination or harassment and expand the definition of sexual harassment to include all "unwelcome sex-based conduct that creates a hostile environment" limiting someone's ability to benefit from a school's programs.

Under Trump-era rules, students had to provide "clear and convincing evidence" that harassment occurred and required cross-examination of witnesses at live hearings.

The Biden administration rules would eliminate mandatory cross-examination and use a standard of proof that shows discrimination likely happened. As a presidential candidate, Biden said DeVos' Title IX rules "shame and silence survivors."

The White House did not immediately respond to DeVos' comments Thursday.

DeVos said Biden had approached her backstage at an event to ask whether she had any "hardware" after her injury and said he had nine screws in his shoulder "but everybody thought they were in his head."

She also recounted the January 2019 meeting in her book released in June, in which she described it as "uncomfortable" and "gross."

On Wednesday, she said she brought up the incident again to illustrate how the Biden administration "is so bent on trying to politicize and weaponize a law that was meant to protect women and to give them access to education, not to weaponize it to harm others."