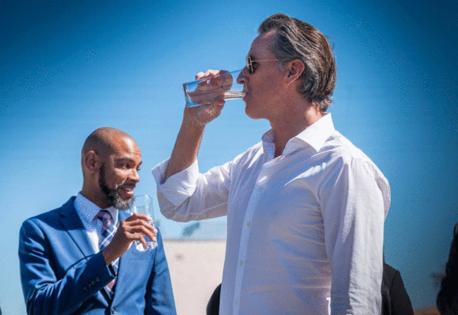 SACRAMENTO, Calif. — The word got out and the environmental lobby was quick to pounce: After years of silence on the issue, Gov. Gavin Newsom’s administration was reviving a controversial plan to burrow a tunnel beneath the Sacramento-San Joaquin Delta, the fragile hub of California’s water-delivery system.

Environmentalists said the tunnel would wreck the Delta, not fix it. Ailing fish populations would be driven further to extinction. The reworking of the Delta’s plumbing would leave Delta farmers with water too salty for raising grapes, tomatoes and other crops, they said.

“This proposal is not a plan that protects the environment,” said the Natural Resources Defense Council’s Doug Obegi.

Environmentalists criticizing the governor of California seems to be a recurring theme lately.

Environmentalists are unhappy with Newsom for signing a bill that could prolong the life of a fleet of aging gas-fired power plants — and for offering a massive loan to California’s notoriously unpopular utility to keep a nuclear plant open. They criticized him for endorsing a plan to allow refineries and other industrial polluters to bury some of their carbon dioxide emissions underground. They complained bitterly when he declared his opposition to a ballot initiative that would tax the rich to subsidize electric-car purchases.

And it’s not just independent environmental organizations taking aim at Newsom. Last month, one of Newsom’s top drought officials resigned in protest, saying the administration was too willing to compromise its ideals — and wouldn’t take swift, decisive action that would actually help the ecosystem and people suffering from a changing climate.

“Witnessing the agency’s ability to tackle big challenges nearly eviscerated by this Administration has been gut wrenching,” Max Gomberg, the longtime climate and conservation manager at the State Water Resources Control Board, wrote in his resignation letter posted online.

Quite a shot at a governor who considers himself — and his state — the unrivaled leader on climate change and other environmental issues.

When the U.S. Supreme Court severely weakened the federal government’s authority to regulate greenhouse gas emissions, Newsom said Califonria would take it upon itself to continue fighting climate change.

“California will remain the tentpole for this movement with record investments and aggressive policies to reduce pollution, to protect people from extreme weather, and to leave our children and grandchildren a world that’s better off than we found it,” he said in June.