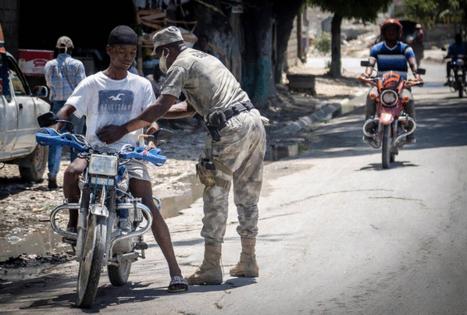 When the number of gang-involved massacres in Haiti stood at five a few years ago, the head of a leading human rights group warned U.S. lawmakers about the Caribbean nation’s exploding crises of gang violence and firearms trafficking.

“From the capital to provincial cities, Haiti is full of armed gangs that enjoy the protection of the executive and legislative powers,” Esperance testified in 2019 before a House Foreign Affairs committee on the Western Hemisphere in Washington. “They regularly receive money and automatic firearms, and they never run out of ammunition.”

He accused then-Haitian President Jovenel Moïse of using armed gangs to repress political dissent in opposition strongholds like the La Saline neighborhood of Port-au-Prince, where government officials were implicated in a 2018 massacre involving at least 71 deaths.

“Armed gangs, with the protection of government authorities, have carried out five massacres over the course of President Jovenel Moise’s administration,“ he testified.

Although Esperance may have strained to gain the attention of Congress, Haiti observers say, his words were prophetic: In July, a new round of deadly gang clashes left 470 people dead, injured or missing over a nine-day period in Cité Soleil, the capital’s largest slum, according to the United Nations. According to witnesses, young men had their arms and legs chopped off, babies and the elderly were burned alive inside homes in the Brooklyn neighborhood and more than a dozen women were raped.

“This is a big problem and not easy to solve, but you would think they would be doing more to crack down on it,” a senior congressional staffer told the Miami Herald. “It’s affecting everything we are trying to do in these countries. Haiti is now a failed state where gangs with automatic weapons are in control.”

In the time since Esperance’s testimony before Congress — a period of extraordinary turmoil including the assassination of Moïse last July — gangs have grown even more virulent and potent, tightening their grip on the Haitian territory amid the political vacuum created by the president’s slaying.

Today, the number of documented armed attacks and massacres has tripled to at least 17 since 2018, Esperance said. The most recent two occurred between April and May in the La Plaine du Cul-de-Sac area just east of Port-au-Prince, and last month in Cité Soleil.

The war between rival gang alliances G-Pèp and the federated G-9 and Families and Allies in Cité Soleil involved several cases of collective and repeated rapes, perpetrated against women and girls, and a lot of violence, the National Human Rights Defense Network said in a new report it published Tuesday.