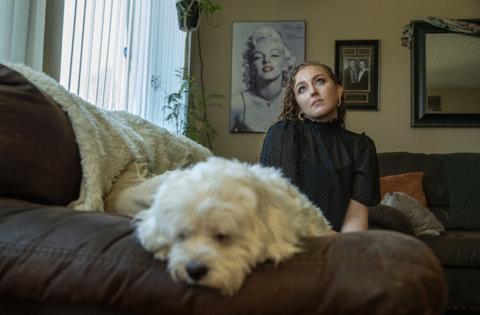 She had worked with Los Angeles police investigators for months to prove that her former boyfriend, an LAPD officer, had sexually assaulted her and acted inappropriately with other women and arrestees. Then, in September, she received a letter saying they had corroborated her claims.

The letter also said an "appropriate penalty" would be imposed on her ex-boyfriend, Officer Oscar Rojas, but it would not be disclosed to Mathews or the public due to confidentiality laws around police personnel records.

Mathews, a 35-year-old actress and television production assistant, said relief washed over her. Prosecutors had already decided not to charge Rojas criminally, citing a lack of evidence, but the LAPD's letter made it seem as if he would at least be held accountable within the department.

"Although I don't know the exact punishment, knowing that my tears didn't fall on deaf ears is a small victory and some kind of justice," she said in an emotional TikTok post.

Mathews' case is one of many in recent years in which LAPD officers accused of serious misconduct have been spared punishment by department disciplinary boards whose decisions trump those of internal investigators and the police chief and occur under a veil of secrecy that deters independent scrutiny.

According to an investigation by The Times, the assault finding against Rojas was quietly overturned by such a panel after what's known as a Board of Rights proceeding. Rojas, who declined to comment through an attorney, was never disciplined for assault and remains an officer despite being recommended for termination by Chief Michel Moore.

He returned to the job and worked out of the Foothill Division until recently, when he was reassigned to home pending a new investigation into an unrelated matter that officials would not describe.

The issue of officer discipline has attracted attention for years. Moore criticized the process in 2020 as too lenient on the most problematic officers. In January, Mayor Eric Garcetti said the disciplinary process needed to be reformed because it too often resulted in stiff penalties supported by top city and police officials being set aside in favor of lesser penalties or none at all. In March, the LAPD inspector general released a report finding that most officers found to have wrongfully opened fire on people in recent years avoided serious punishment or received no discipline at all.