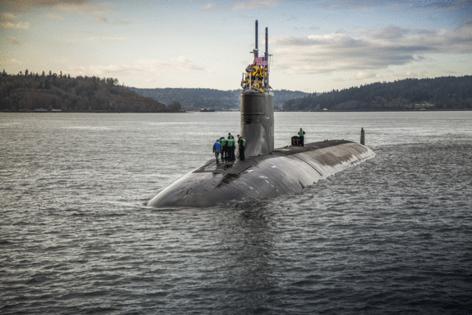 BALTIMORE — A federal judge rejected Tuesday the government’s proposed prison sentences, saying they were too lenient, for former Annapolis-based Navy engineer Jonathan Toebbe and his wife, six months after they pleaded guilty to a conspiracy to sell classified nuclear submarine secrets to a foreign government.

U.S. District Court Judge Gina Groh for the Northern District of West Virginia said the proposed sentences for Toebbe, 43, and his wife, Diana, were “not in the best interest” of the country.

Prosecutors sought to have Jonathan Toebbe sentenced to anywhere between 12 1/2 years and 17 1/2 years, and for Diana Toebbe, 46, to serve three years in prison.

As a result, the Toebbes withdrew their guilty pleas and Groh set a new trial date for Jan. 17, but it is likely the government and the Toebbes will reach new plea agreements before then.

Jonathan Toebbe was a naval officer with top-secret security clearance and had worked on projects related to nuclear submarine propulsion since 2012. Diana Toebbe was a humanities teacher at Key School in the Annapolis area.

Publicly, the Toebbes were a normal suburban couple — Diana Toebbe posted knitting videos online and they lived in the Hillsmere Shores neighborhood, a suburb of Annapolis, with their two kids. Privately, they were spies intent on selling some of America’s military secrets to a foreign government.

Authorities, in public and in court papers, have never revealed to which country the Toebbes sought to sell the information.

Groh said the Toebbes’ would-be sentences were too lenient, and that low-level drug dealers often are sentenced to prison “way longer” than the 36 months the government sought for Diana Toebbe.

Prosecutors and Diana Toebbe’s lawyer, Barry P. Beck, argued her lack of defense expertise and limited involvement, as well as the stigma with her crime, made three years an appropriate sentence.

“She will be labeled a spy for the rest of her life,” Assistant U.S. Attorney Jarod Douglas said.