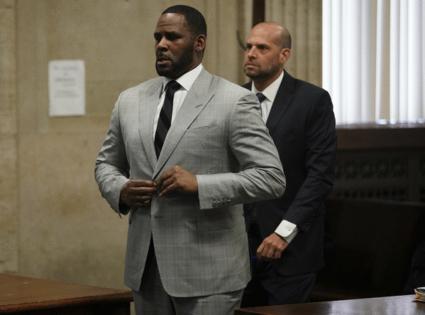 CHICAGO — Another 24 potential jurors were questioned Tuesday during the first phase of jury selection for R. Kelly’s Chicago federal trial, and the selection process is expected to finish Tuesday afternoon.

Eleven prospective jurors questioned Tuesday were excused, including a woman who appeared to nearly faint as she was answering questions. The judge also dismissed a man who had been questioned Monday, bringing the total number of jurors who made it past the first round of cuts to 45.

U.S. District Judge Harry Leinenweber said that questioning would resume after a lunch break. After the initial dismissals for “cause,” prosecutors and attorneys for all three defendants can strike jurors without needing to state a reason. In addition to the 12 regular jurors, the judge has said he wants to empanel six alternates.

One potential juror had a medical episode in the middle of questioning Tuesday, a dizzy spell that hit just as Leinenweber was asking her how long she had lived in her current address. Emergency responders were summoned to the building, and the woman was dismissed from jury duty.

Apart from that, the questioning Tuesday morning was largely uneventful. As on Monday, Leinenweber’s questions for each potential juror have focused on what they might have seen or heard about Kelly in the news, and whether they’ve watched the Lifetime docuseries “Surviving R. Kelly,” which detailed many of the sexual misconduct allegations that are part of the indictment.

Seated at the defense table, Kelly has been taking an active part in the selection process, putting headphones on to listen to sidebar conversations and whispering often with his attorneys.

The singer has also visibly reacted to many prospective jurors’ answers, including one woman, a retired teacher, who had him laughing out loud when she proudly said she’d filled out the questionnaire “all by myself.”

While Leinenweber said the trial might proceed to opening statements Tuesday, that now seems unlikely, given the pace of jury selection.

Kelly, 55, was charged with child pornography and obstruction of justice in a 2019 indictment alleging he conspired with others to rig his Cook County trial years ago by paying off a teenage girl whom he sexually assaulted on a now-infamous videotape.

Also facing trial are Kelly’s former business manager, Derrel McDavid, and another associate, Milton “June” Brown, who, according to the indictment, schemed to buy back incriminating sex tapes that had been taken from Kelly’s collection and hide years of alleged sexual abuse of underage girls.

HARTFORD, Conn. — The parents of one of the first graders murdered in the Sandy Hook school shootings described Tuesday how nearly a decade of harassment by followers of right wing broadcaster Alex Jones has shattered ...Read More

CHICAGO — Nearly 1,500 migrants have arrived in Chicago from Texas as of Tuesday, city officials said.

The migrants have been bused to Chicago over the last several weeks as part of Texas Gov. Greg Abbott’s promise to...Read More

NEW YORK — Four people, two of them teenagers, were shot Tuesday in a Queens park when they were caught in the crossfire of rival groups firing bullets at each other, police and sources said.

The victims were in London ...Read More

LOS ANGELES — A 15-year-old girl and her father were killed by San Bernardino County sheriff's deputies Tuesday in a shootout off Interstate 15, authorities said, a day after the man is believed to have fatally shot his ...Read More

Porfirio Duarte-Herrera, 42, was serving a life sentence after being ...Read More

A damaged hospital, destroyed homes, downed trees and power poles, and towns where residents wade through waist-deep water. Those are some of the images coming out of Cuba in the aftermath of the destruction left by ...Read More