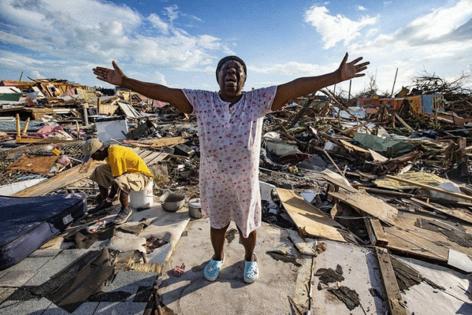 Almost three years to the day after powerful Category 5 Hurricane Dorian ripped though the northwestern Bahamas, leaving billions of dollars in damage, the island nation welcomed Tuesday delegates from 17 Caribbean countries and international financing institutions to a two-day high-level summit to address the climate crisis.

The historic meeting, hosted by the Bahamas at a resort in Nassau, comes ahead of the United Nations Climate Conference, more commonly referred to as COP 27, in November in Sharm El-Sheikh, Egypt. The goal, said Prime Minister Philip Davis, who lauded the recent passage of the massive climate change bill in the U.S. Congress, is for Caribbean leaders to speak with one voice.

“Our goal is to construct practical financing solutions, ones that help us move forward rather than lead to further indebtedness,” Davis said at an opening press conference. “I remain optimistic about our collective ability to meet the challenge of climate change.”

Davis said while there is no country on earth where the impact of climate change cannot be felt, for small islands and nations like the Bahamas and others in the Caribbean, “the threat is existential.

“This is the front lines,” he said, citing a report that showed that sea levels rose last year more swiftly in the Caribbean region than anywhere else in the region.

The Bahamas and other nations in the Caribbean know they need to rebuild for resiliency and to adapt to the realities of a warming planet, the prime minister added, a task made harder by the impact of a storm like Dorian, which ripped through the country over Labor Day weekend in 2019.

“That one storm alone cost our small country billions of dollars,” Davis said. “In fact half our country’s debt can be linked to hurricane damage.”

Adding to the financing woes are the recent effects of the COVID-19 pandemic, which have caused tourist-dependent Caribbean governments to go deeper into debt. Yet, many do not qualify for lower-interest loans because they are considered middle-income countries.

“Coming together and being able to unify our voices will have more impact than if we speak separately on issues of climate change,” Davis said. “What we expect to achieve here is... ensuring that the individual needs of our Caribbean communities are identified to see how we could find our common interests and common cause to ensure that our voice is heard.”

Over the two days delegate will discuss a number of issues, which will than be put to COP 27. Davis said a lot of commitments have been made by what he calls “the world’s largest emitters [of fossil fuels] and industrialized nations,” but so far the commitments have not been lived up to.

“I’ve said it before, we have commitment fatigue, and we have pledge fatigue, “ he said. “The time for action is now.”