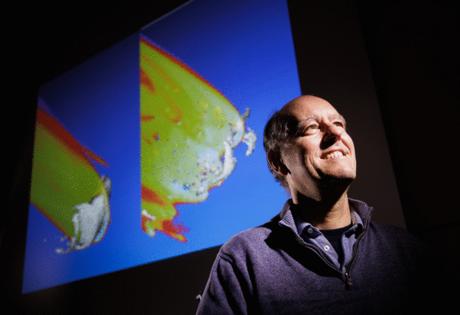 An analysis of the glass-crusted black rock and its 600 siblings is revealing, for the first time, the life and death of meteors that streak across our nighttime skies.

“It’s like a little window into the earliest times of our solar system … before there was such a thing as Earth,” said meteor astronomer Peter Jenniskens of the SETI Institute and NASA Ames Research Center, who led the study published Aug. 8 in the journal Meteoritics and Planetary Science.

Since the dawn of humanity, the explosive streak of a meteor across the night sky has inspired fear and bewilderment.

Scientists believe that asteroids are the wreckage of destroyed would-be-planets, created in the first chaotic million years of the solar system.

Circling between what is now Mars and Jupiter, these planets collided – blown to smithereens – and created fields of debris, called asteroids. In an orbiting belt that’s been dubbed “the blood spatter of the solar system,” asteroids continue to collide — and sometimes chunks fall out of the belt, hit the Earth’s atmosphere and fall to the ground as meteorites.

The new research announced this week is notable because it tells a meteorite’s origin story.

That was possible because astronomers detected and tracked an 88-ton asteroid, called 2008-TC3, long before it actually hit us. They watched it enter Earth’s atmosphere, melt away, and then explode, showering the landscape with rock shards. These meteorites were recovered and the location of each piece was mapped. From the pattern, they could prove what part of the asteroid had survived to the ground.

It was the first time that rocks could be directly linked to an asteroid observed in space.

“What makes this work especially exciting is that the scientists were able to track the incoming meteoroid, to know where it would fall, and then go find the specific remains,” said science educator Andrew Fraknoi, emeritus chair of the Astronomy Department at Foothill College in Los Altos Hills.