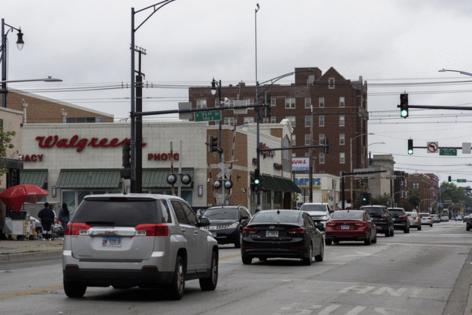 CHICAGO — At least four people were struck by a vehicle — possibly intentionally — in the South Shore area Sunday morning and three of the four later died at an area hospital, Chicago police said.

Authorities were called to the 7000 block of South Jeffery Boulevard around 5 a.m., according to an online statement from police. A sedan had been traveling south “when it struck four adult male pedestrians,” authorities said.

A graphic video posted online by CWBChicago appears to show the crash. In it, a white or silver sedan is traveling at a high rate of speed toward a group of six or more men standing in the street, possibly arguing. The sedan careens into the group without slowing down, sending some of the victims hurling through the air, as far as roughly 30 feet.

Three of the men were rushed by paramedics to University of Chicago Medical Center and later were pronounced dead. The names of two of the three men were released Sunday night, while the Cook County medical examiner’s office had not reached the family of the third victim to notify them of their relative’s death.

Devonta Vivetter, 27, of the 6100 block of South Carpenter Street in Chicago was pronounced dead at 5 a.m., according to information released by the medical examiner’s office. Donald Huey, 25, of the 15100 block of Perry Avenue in South Holland died at 5:35 a.m., the agency said. The third man also was pronounced dead at 5:35 a.m. The medical examiner’s office listed the exact address of the fatal collision as 7041 S. Jeffery Boulevard, which is the address of The Jeffery Pub, the oldest LGBTQ+ bar on the South Side, as well as one of the only such Black-owned bars in the city.

The bar, which closes at 5 a.m., addressed the crash on its Facebook page Sunday.

“A very unfortunate tragic event occurred early this morning after closing. A small group of people were in the street and an unidentified vehicle drove past at a very high rate of speed injuring several people ...” it said. “Our hearts (are) heavy this morning that such tragic event has occurred. And to those that lost a loved one or friend we stand with you. We always encourage everyone to leave and go to your vehicles right away to make it home safe.”

Nearby residents who live in Jeffery Towers, a short walk from the pub, could only point in the direction of the deadly scene — still unsure what happened leading up to the death of three young men. A citizen’s app notification, a YouTube video and overheard buzz from neighbors provided clues as to what the fatal scene may have looked like. But the residents said it seems as though “there’s always something” happening in the area, particularly near the pub, which they said is notorious for fights breaking out, especially after midnight.

Don Terry, a police spokesman, would not confirm whether the crash was an accident or intentional.

“Whatever is on the (online statement) is what we’re able to release right now,” Terry said.

The fire official said a fourth person was taken to Stroger Hospital in serious-to-critical condition. He also said they believe a fifth person may have been struck and that he or she was taken to a hospital in a private vehicle.

The response to a Tribune email to police containing questions did not contain any answers, but according to the online statement, the driver of the sedan remained at large as of 8 a.m. Authorities did not release additional information about the type of vehicle they were searching for.

“No updates are available,” the emailed response from police said.