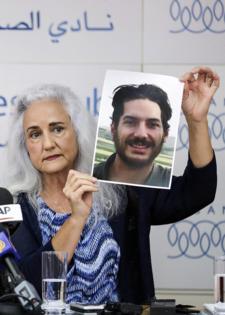 WASHINGTON — The Biden administration will continue to engage directly with the Syrian government to locate and return Austin Tice, a journalist missing for a decade in Syria, Secretary of State Antony Blinken said on Sunday.

Blinken was speaking at an event at the National Press Club in Washington, D.C., commemorating 10 years since Tice, a freelance correspondent who reported for McClatchy, The Washington Post and other media outlets, disappeared on Aug. 14, 2012.

“There’s nothing that I can say that will take away the pain of 10 years of waiting, but I want you to know that the U.S. government is unwavering in our commitment to bring Austin home,” Blinken said in a video message.

Blinken said that Special Envoy for Hostage Affairs Roger Carstens “will continue to engage with the Syrian government, in close cooperation with the White House.”

“This is a priority for us,” Blinken said.

Three presidents have failed to locate Tice or bring him home, but President Joe Biden said on Wednesday that the United States knows “with certainty” that the Syrian government has held him at some point in the past decade.

The Syrian government continues to deny any knowledge of Tice’s whereabouts or condition. But U.S. and Syrian officials have restarted direct talks on Tice in recent weeks, spurring hope in the Biden administration that a serious negotiation is possible.

Tice’s parents, Debra and Marc Tice, were in attendance at the Washington event.

“Today, Austin has to grapple with the terrible realization of losing 10 years of his life. For me, it is the most painful of the 3,653 days that my firstborn has been held in secret,” Debra Tice said. “Despite the crushing weight of this day, my heart is still full with hope.”

Debra Tice held meetings in Washington throughout the week with government officials.