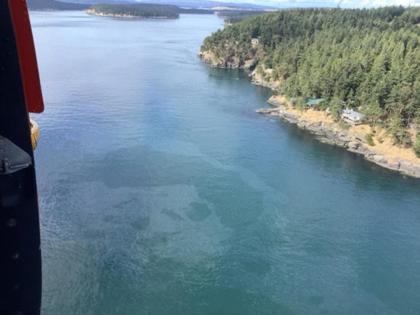 SEATTLE — A 49-foot commercial fishing vessel carrying an estimated 2,600 gallons of diesel and oil sank off the coast of San Juan Island Saturday, according to the U.S. Coast Guard.

All five crewmembers onboard the Aleutian Isle were rescued by a good Samaritan, the Coast Guard said in a statement. Attention has since turned to the pollution impact of the incident, which happened west of Sunset Point.

The Coast Guard Sector Puget Sound received a report that the vessel was taking on water at approximately 2 p.m. Saturday. By around 5 p.m., a visible sheen covering 1.75 miles could be seen by on-scene personnel, the Coast Guard said.

Due to the incident’s close proximity to the Canadian border, the Coast Guard is working with the Canadian Regional Operation Center as well as the San Juan County Office of Emergency Management, Washington State Department of Ecology, the Island Oil Spill Association and others.

An allocation of $130,000 for commercial pollution response and salvage operations was authorized by the National Oil Spill Liability Trust Fund and contractors are working to minimize the impact to sensitive areas of the shoreline, according to the Coast Guard.

“We are working with government and industry partners to ensure an efficient and effective containment and recovery response,” said Lt. Cdr. Brian Dykens, Sector Puget Sound Incident Management Division Chief, in a statement. “The local public, the environment and protected marine species are our top priority.”

As of Saturday night, the Coast Guard was working with the National Oceanic and Atmospheric Administration and Sound Watch to monitor the location of southern resident killer whales.

Though whales were not in the Sunset Point area at that time the vessel sank, the Coast Guard said on Twitter the organizations were prepared to keep whales clear of the impacted area, should that be necessary.

NOAA is assessing risks and analyzing spill trajectory in an effort to protect marine mammals in the area.

Throughout Saturday evening, responding units, including the 87-foot Coast Guard Cutter Swordfish, were working to ensure no other vessels were traveling through the affected area, according to Petty Officer Michael Clark.